The Military Court of Appeals at the Kirya will hear Azaria's appeal, who was convicted of killing a neutralized terrorist in Hebron and sentenced to one-and-a-half years in prison; defense attorney plans to challenge the manslaughter conviction, while the military prosecution prepares to appeal what they deem an overly lenient sentence.

The appeal stage in the trial of Elor Azaria, who was convicted of killing a neutralized terrorist in Hebron and sentenced to a year-and-a-half in prison, began Wednesday morning at the IDF Headquarters in Tel Aviv.

Azaria's defense team challenged the manslaughter conviction of the wounded terrorist Abdel Fattah al-Sharif in Hebron in March 2016, who moments before his death had carried out a stabbing attack. Two months ago, the court ordered that the sentence be suspended until after the decision on the appeal. 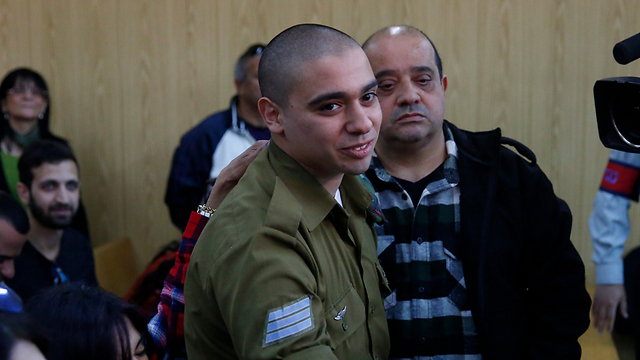 Azaria argued in an appeal filed by his attorney that the judges who sentenced him ignored a plethora of evidence in his favor. His attorney also claimed that the Military Police's alleged impartial investigation contained biased witnesses which established the suspicion against him.

Following the filing of the appeal, two of the three attorneys who originally represented Azaria—Ilan Katz and Eyal Besserglick—announced their resignation from his defense team, leaving Yoram Sheftel the sole attorney remaining in his corner.

At first, the Military Advocate General's Office expressed its content with the lenient sentence, but Azaria's appeal against the decision—along with the resignation of most of his defense attorneys who favored the request for military leniency or pardon from the president—tipped the scales in favor of an appeal by the prosecution.

During the hearing, Sheftel opened his remarks in Yiddish saying it was a "mitzvah and the greatest right to defend a Jewish soldier. The very fact that he is brought to trial stands in complete contradiction to the indictment of a soldier. Even if this is an operational error, it should be never prosecuted." During the hearing, he intended to present "17 cases that indicate that when there is a shooting that kills terrorists, fascists or Arabs from the West Bank, there should be no prosecution."

After Sheftel had finished speaking, it was the turn of the prosecutor in the trial, Lt. Col. Nadav Weissman, who objected to Sheftel's request to receive investigation materials. "According to the clear ruling, in order to pass such a request, it is necessary to address the aspects Sheftel ignored: the timing of the request and whether it could have been filed in the first instance, since all the evidence from the defense applicant existed in the past year."

Weissman emphasized that "in none of the cases that Sheftel brought up, is there evidence of a shooter saying after the shooting, 'I fired because the terrorist deserved to die.'"

The judge summed up Sheftel's request by claiming the defense was trying to turn the clock back as the ruling had already been handed down, stating: "The trial is over."

This first of two hearings in which the parties presented their cases marked the beginning of the appeal process. A second hearing will be held next week and a third discussion will be scheduled if necessary.

The panel of the five judges is expected to discuss the application, and the prosecution is expected to express its opposition to the move, since such a procedure, even if partially accepted, will extend the appeal process for many more weeks.