Mashal and his group are slyly indicating to Trump and the European Union: Take us
Photo: AFP 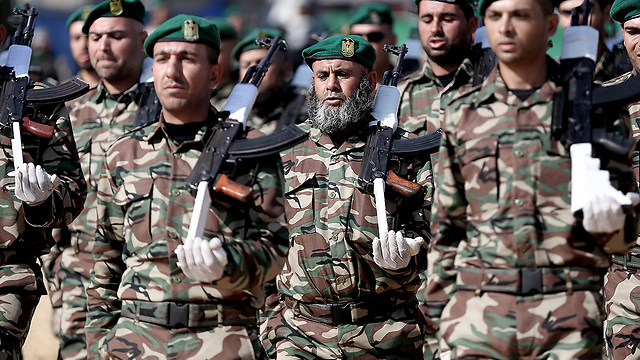 Analysis: While the Islamist organization has finally erased the call to destroy Israel, it is vowing to never give up the armed struggle against the occupation, ‘in all ways and means.’ In other words, we are not rid of suicide bombers, stabbings, explosive devices, tunnels, rockets and abductions.

One day, we will be exposed to the talks held between so-called unofficial Israeli emissaries and key figures in Hamas. I am familiar with at least two cases, in which the parties had no problem engaging in long conversations behind the scenes. Naturally, until further notice, no one will confirm or reveal anything.

It’s important to admit that these talks yielded very little on the ground. Their advantage is in deepening the understandings of what bothers Israel and what annoys (but who cares?) the other side.

One cannot ignore the cynical timing in which Hamas presented its “document of principles and general policies.” It hit us (although unsurprisingly) in the transition between Memorial Day and Independence Day. It hit Palestinian President Mahmoud Abbas (who had prior knowledge of it) on his way to a meeting with US President Donald Trump at the White House. And let’s not forget the Palestinian prisoners’ hunger strike led by Marwan Barghouti, who is seeking to replace 83-year-old Abbas as Palestinian Authority president, when the latter decides to step down or no longer exists. It is also the last political move—barring any surprises—of Hamas’ secretary-general, Khaled Mashal, who is supposed to retire.

Hamas is a stubborn ideological movement that has vowed to never recognize Israel, to continue the violence and not to give up an inch (Photo: EPA)

Hamas worked on this document for at least three years, consulting jurists, the military wing in Gaza, Hamas veterans abroad (Moussa Abu Marzouk) and the movement’s philosopher (Azzam Tamimi in London, who is unhappy with the end result). The top Hamas prisoners in our jails offered their two cents as well from behind the bars. Delving into the 42 sections of the document, one can detect quite easily the power struggles and serious differences of opinion between the Hamas in Gaza and the Hamas outside the strip, which is even more radical.

No matter how we look at it, the original Hamas Charter has undergone a mini facelift: Hamas is finally erasing the call to destroy Israel, but is vowing at the same time to never give up the armed struggle against the occupation, “in all ways and means.” This means we are not rid of suicide bombers, stabbings, explosive devices, tunnels, rockets and abductions. Only a week ago, I received an email with a repulsive Hamas propaganda video—a sort of punch in the stomach—about the Israeli MIAs, which our media chose to ignore, and rightfully so.

The updated document has two new aspects: For the first time, Hamas is calling for the establishment of a Palestinian state within the 1967 borders. This means that the dreams about “the great Palestine” have disappeared—the document demands an independent Palestinian state, led by Hamas, in all the West Bank and the Gaza Strip with east Jerusalem as its capital. This also means, without mentioning the explicit name, that Hamas is coming to terms with the idea of “another state,” Israel, as its close neighbor. Unlike Abbas’ PA, however, Hamas is first of all demanding the liberation of all occupied territories, through its own methods, without giving up an inch and without agreeing to a land swap.

The Hamas leadership is using the new document as part of its effort to rid itself of the label of a terror organization. They are shaking off their ties to the mother movement, the Muslim Brotherhood, and promising Egypt and Jordan “not to intervene in the matters of other countries.” For this reason, they are also announcing that Hamas has nothing against the Jews and Judaism, but only against “the Zionist occupation.”

Moreover, Mashal and his group are slyly indicating to Trump and the European Union: Take us. You and we know that Abbas is done and that Hamas is more popular among Palestinians more than the corrupt Fatah. Give us the opportunity we deserve, because we are “the national movement for liberation,” while Abbas is cutting salaries and has stopped funding Gaza electricity because he has lost power.

If we could address the “document of principles” as a starting point, continue the discreet dialogue and put changes into it, we would be able to blur the long accounts waiting to be settled with Hamas and march together toward the dawn of a new day. But Hamas is a stubborn ideological movement, which has vowed to never recognize Israel, to continue the violence and not to give up an inch. I take their word for it.