Anti-Semitic incitement, failing economy and food shortages are driving Venezuela’s Jews out; with eased restrictions on their entry to Israel, immigrants flock to the Land of Zion in pursuit of a new life.

Avraham Ben Gigi, a young 23-year old from Venezuela, never thought much about immigrating to Israel. Born to an Israeli father, Ben Gigi grew up in San Antonio de Los Altos, a suburb of Caracas, as part of the only Jewish family in town with no real way to keep Jewish traditions. He moved to Israel a few months ago and is celebrating his first Independence Day as an Israeli citizen.

“I had originally not thought about coming to Israel,” Ben Gigi told Tazpit Press Service (TPS). “I wanted to go to America, and I did, first to Philadelphia, then to Miami. But life is extremely difficult for an immigrant in America,” 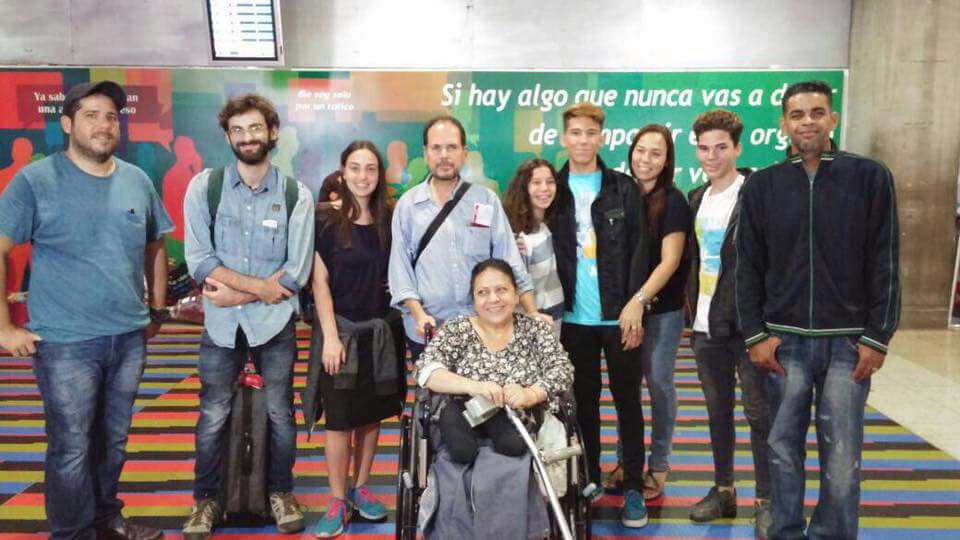 Venezuelan immigrants before boarding for Israel (Photo: TPS)
“I didn’t really feel I could stay in America, and I certainly did not want to go back to Venezuela. A friend suggested that I consider coming to Israel and when I heard about the absorption package, I decided to give it a try,” Ben Gigi explained. Due to Venezuela’s worsening economic and political crises, Venezuelan elites have been fleeing the country in growing numbers. Jews were hit particularly hard by economic hardships and food shortages after the Venezuelan government declared a state of emergency in May, 2016, as a result of poor economic management combined with falling oil prices. There has been a Jewish presence in Venezuela since the marranos (Jews living in Iberia who were forced to convert to Christianity yet continued to practice Judaism in secret) came to the country in the 17th century, but more and more of the Jews of Venezuela have been making the decision to move to Israel over the past year. Former Venezuelan President Hugo Chavez was notoriously hostile to Israel and even expelled the Israeli ambassador from Caracas during Operation Cast Lead in 2009. The Jewish community under his regime suffered many anti-Semitic attacks. According to the Anti-Defamation League, the new Venezuelan government under President Nicolas Maduro has been steadily fueling an “incendiary” anti-Israel and anti-Semitic environment. The government repeatedly called on the Jewish community to condemn Operation Protective Edge in 2014 and it issued numerous statements comparing Israel to the Nazis. “Three months in, I can say that my move to Israel was the best decision I ever made. I can wear a kippa here and fit in. In Venezuela, the nearest synagogue was at least a 30-minute drive from my house,” Ben Gigi said. “I never had occasion to think about it before, but I am able to truly be myself here, in a way that I never was able to growing up,” he continued. There are about approximately 1,500 immigrants from Venezuela in Israel today, some 80 of them having arrived over the last year. Since the beginning of 2017, a total of 42 Venezuelans immigrated to Israel with the help of the International Fellowship of Christians and Jews (IFCJ), which helps Jews move to Israel from all over the world. Asked whether his family would like to join him, Ben-Gigi said that all Venezuelan Jews would leave the country if they could, but he added that the cost of relocation make it difficult. He explained that his family used to be middle class, with a house, a boat, and two cars, but that they are now unable to properly sell their property in order to move. Venezuelan Jews have also encountered serious obstacles with immigrating to Israel under the Law of Return because of conversion issues. In January 2017, Israel finally allowed nine Venezuelan converts to enter the country after denying them entry due to concerns that they were not converted in a “recognized Jewish community,” were not sufficiently involved in Jewish life, and were potentially exploiting the Law of Return in order to flee an unstable Venezuela. “Stories like Avraham Ben Gigi’s reflect the current disastrous situation going on in Venezuela today,” IFCJ President Rabbi Yechiel Eckstein told TPS. “It is our mission to do all we can every day to help the Jewish community get out of Venezuela and arrive safely in Israel. But this is a dangerous and hard task, both for our organization and for the Jews leaving their life and family behind.”

“On the occasion of Independence Day of 2017, we are proud to say that we have brought 42 new immigrants to Israel from Venezuela since the beginning of this year with more to come, new immigrants who can finally celebrate their independence in Israel,” declared Eckstein.