US President Donald Trump. For him, appearance is everything
Photo: AP 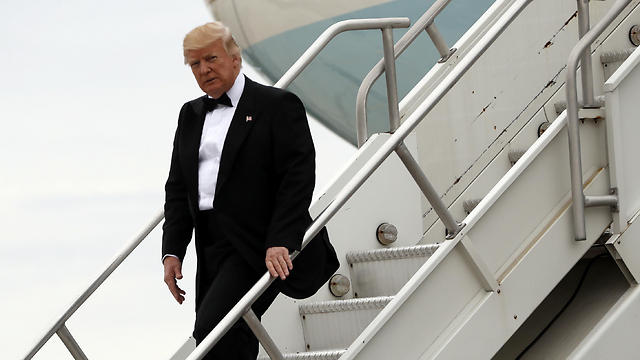 Op-ed: Expecting an unstable person like the US president to broker an Israeli-Palestinian peace agreement is like expecting a compulsive gambler to serve as a guide for level-headed behavior.

Here’s an unpleasant truth: US President Donald Trump did not plan his visit to Saudi Arabia, Israel and the Vatican this month to create a bridge between the three religions or finalize an Israeli-Palestinian deal, but because the places he plans to visit are likely the only places where he will not be greeted with protests.

Thus, Trump made sure that his first presidential visit outside the United States would not be interrupted by angry protestors and that the television channels he hates would nor air embarrassing images. For him, after all, appearance is everything.

A sea of commentaries have been written in Israel and in America about Palestinian President Mahmoud Abbas’s visit to the White House and about the “exceptional” atmosphere during the meeting. Indeed, it was an exceptional meeting: Trump arrived tired and unhappy with its actual existence. He was unfocused most of the time, and woke up from his indifference only when he managed to glance at the television screen from the corner of his eye. He is addicted to television. He had no interest in the Palestinian guest and his complaints.

As far as Trump is concerned, he is still in the middle of a heated populist election campaign (Photo: AP)

That’s Trump. As far as he is concerned, he is still in the middle of a heated populist election campaign against the candidate of the treacherous Left. That’s the most important thing. All the rest just buzzes near his ears like a nagging mosquito.

Moreover, Trump knows very little about international issues in general and about Middle Eastern issues in particular. His assistants and advisors’ attempts to explain the depths of the Israeli-Palestinian conflict to him have so far failed. He listened impatiently, showing no interest in the historical background. In general, history bores him, including American history, which is why almost every public reference he makes to events in US history is factually incorrect.

The ignorance and arrogance are joined by another lovely quality: Fickleness (Trump prefers the world “flexibility”). About half a year ago, he lauded Syrian President Bashar al-Assad as a brave fighter against terror; last month, he sent cruise missiles in his direction. Tomorrow, he will praise him again. In the afternoon, he called North Korean leader Kim Jong-un a bloodthirsty dictator; in the evening, he expressed his willingness to meet with that “smart cookie” face-to-face.

Trump’s behavior in the first 100 years of his presidency has been well described by journalist Thomas Friedman: Every few hours, the president comes up with a different immature, untested and inconsistent idea and places it at the top of the agenda. We have no idea why he declares whatever he declares, Friedman writes, and we shouldn’t care, because the following day Trump will pull out a different idea, sometimes an opposite one, and toss it into the air as well. Friedman advises his friends in the media not to go to the effort of interpreting the president’s intentions, as these are not intentions but rather passing whims.

Trump is characterized by irresponsibility not just in the foreign policy area. Here, following pressure from his advisors, he is sometimes convinced to do the right things, but has trouble persisting. There was no continuation, for example, to the missiles fired at the military airport in Syria, although—according to Western intelligence reports—the Assad regime is still producing chemical weapons. In his domestic policy, Trump is not even trying to give an appearance of discretion.

In response to his demonstrated impatience, the Department of Treasury in Washington published a tax reform plan, which is supposed to be (as Trump promised) revolutionary. Its different components are indeed revolutionary, but the entire plan was presented to the public in an unprofessional manner, with very short outlines on a single page. No details, no calculations, no financial estimate of cost and benefit. A collection of thoughts.

Last Thursday, the US House of Representatives narrowly passed legislation repealing the principles of former President Barack Obama’s healthcare reform. The repeal is a disaster for American healthcare, a disaster for weak populations, a disaster for chronic patients, a disaster for the hospital system and a disaster for small employers in the industry. It will likely not be approved by the Senate in its current wording. Its only purpose is to satisfy Trump’s political ego.

Expecting this man to broker an Israeli-Palestinian peace agreement is like expecting a compulsive gambler to serve as a guide for level-headed behavior. It would be better if he just stayed home.