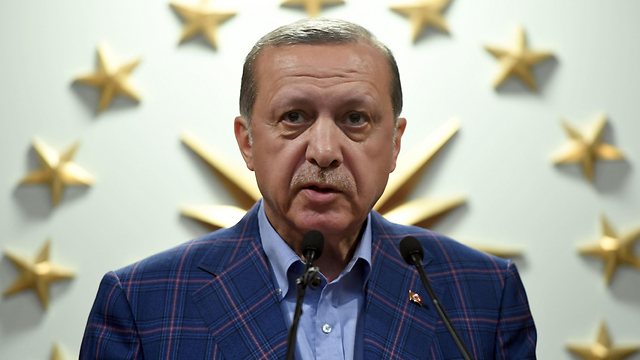 In a series of comments, Turkish President Erdoğan calls Israel 'inhumane and cruel,' while accusing the Jewish state of 'massacres' against the Palestinians; Erdoğan: 'every day that Jerusalem is under occupation is an insult to us.'

Turkish President Recep Tayyip Erdoğan admonished Israel on Monday for the Muezzin Bill and called on Muslims to go to the Al-Aqsa Mosque in the hundreds of thousands to show solidarity with the Palestinians and protect the site's Muslim character.

Erdogan made his comments at the opening of the Istanbul-based Al-Quds Waqf International Forum, saying that his country will not allow for prayers to be silenced in Jerusalem.

"Turkey attaches great importance to the justified resistance of the Palestinians and will not yield to Israeli attempts to change the status quo in the Al-Aqsa Mosque," said Erdogan, according to the Daily Saba newspaper. "We as Muslims should visit the Al-Aqsa Mosque more often, every day that Jerusalem is under occupation is an insult to us."

In the Turkish daily Hürriyet, Erdoğan added, "It is appropriate to pay attention to the fact that those who speak of freedom of thought and belief at every opportunity approve of this step of silencing (others). Inshallah, we will not allow prayers to be silenced in the skies of Jerusalem."

The paper also quoted Erdoğan speaking directly to Israeli leaders, saying, "If you are whole in your faith, why are you afraid of the sound of our prayers?"

In his comments, Erdoğan also accused Israel of discrimination and racism against the Palestinians and declared that the Israeli closure of Gaza "has no place in humanity."

He added that only the establishment of a Palestinian state with East Jerusalem as its capital would bring peace and that the political document published last week by Hamas was "an important step."

The Foreign Ministry curtly responded to Erdoğan's comments Monday night, saying, "He who systematically violates human rights in his country will not preach morality to the only true democracy in the region. Israel adheres strictly to full freedom of worship for Jews, Muslims, and Christians—and will continue to do so in spite of baseless slander."