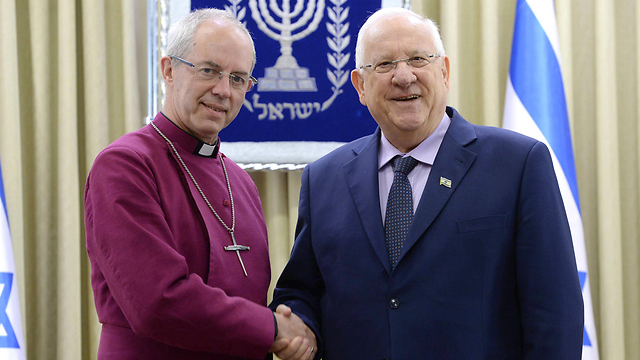 Upon meeting archbishop of Canterbury, Rivlin responds to Erdoğan

President Rivlin: 'We have heard voices which attack Israel for building Jewish life in Jerusalem. For the last 150 years there has been a Jewish majority in Jerusalem, even under the Ottoman Empire.'

President Reuven Rivlin met at his residence on Monday with Archbishop of Canterbury Justin Welby. The Archbishop was accompanied by the Anglican Archbishop of Jerusalem, Suheil Dawani, and the UK Ambassador to Israel, David Quarrey.

Rivlin warmly welcomed the archbishop and spoke of the importance of his visit to the Holy Land.

He said, “Israel is the only country in the Middle East where the Christian community is flourishing. And Israel is committed to the values of freedom of religion for all people of faith. This is our value and our duty as a Jewish-democratic state.”

Rivlin meeting with the Archbishop of Canterbury (Photo: Mark Neiman/GPO)

The president stressed Israel’s commitment to bring an end to the conflict with the Palestinians and stated that the only way to reach an agreement required building trust between the sides. “Anyone who cares for the well-being of the people of this land must be a partner in this mission," he said. "We must not allow voices which teach hatred or call for boycotts, to divide the peoples. We must find ways to bring people together. I believe faith should bring people together.”

Rivlin spoke in relation to recent comments made by the president of Turkey, commenting, “We have heard voices which attack Israel for building Jewish life in Jerusalem. I must tell these people, for the last 150 years there has been a Jewish majority in Jerusalem. Even under the Ottoman Empire there was a Jewish majority in Jerusalem. Under Israeli sovereignty, we continue to build Jerusalem, the eternal capital of the Jewish people. There is no doubt Jerusalem is a microcosm of our ability to live together. And we will continue to ensure freedom of religion for all faiths.”

Welby thanked the President for his warm welcome, and noted that during his visit he had met with Supreme Court President Miriam Naor and a member of the Christian community, Supreme Court Justice Salim Joubran. The archbishop noted that he had been greatly impressed by the tradition of Israel's independent judiciary. “That shows some of the immense strength and depth of this society, its culture and history,” he said.

He continued, “There cannot be peace without every person in the region—Israeli, Israeli Arab, Israeli Jewish, Palestinian—all of them being sure they can pursue their lives, pursue their aims without fearing the bomb or the bullet, without fearing persecution, recognized as being validly and legitimately who they are, knowing they can bring up children, and educate them to love their neighbors, respect them, and listen to them even where they disagree.”

Welby added, “We are at the hundredth anniversary of Balfour, and it has led to extraordinary things,” and noted, “for some of us who are profound friends of Israel, who feel huge admiration, deep affection, and who loathe and hate anti-Semitism, and speak against it wherever it occurs, whether it is implicit or explicit, there is an element of unfinished business. Because until there is peace in the region, the Balfour Declaration has an element of unfinished business.”

At the end of their meeting, President Rivlin reiterated his invitation for the British royal family to visit Israel. He said, “We would be happy to welcome a member of the royal family here in Jerusalem, especially marking 100 years since the Balfour Declaration.”