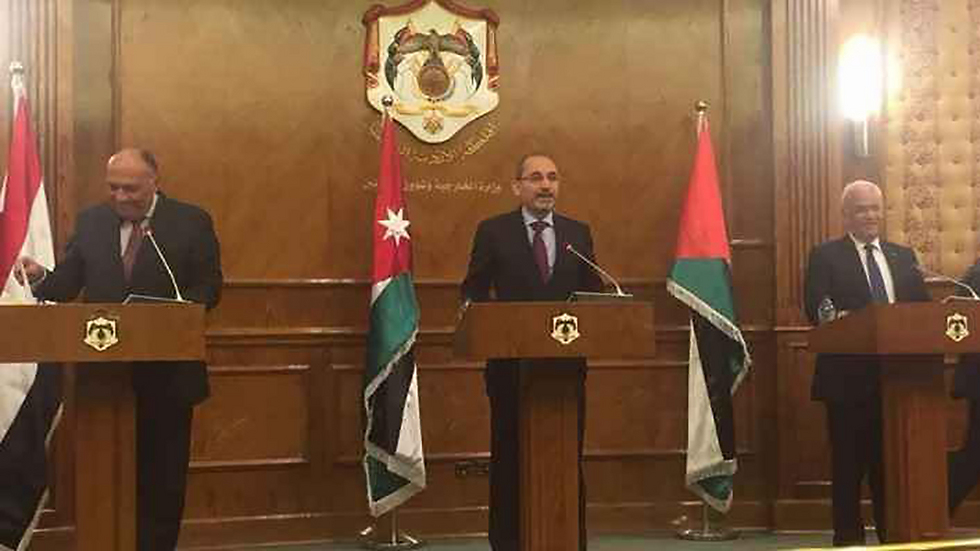 Responding to Netanyahu, Jordan says stance against terrorism 'clear to everyone'

After Israel and Jordan trade accusations and condemnations over Saturday's stabbing attack which resulted in the killing of a Jordanian citizen, Jordan announces, 'Our positions against violence and terrorism are clear to everyone,' adding that they are invested in 'establishing security, peace and freedom for the Palestinians.'

Jordan's foreign minister insisted that his country's position opposing terrorism was "clear to everyone" on Sunday. The preceding day, Israel's prime minister critized the kingdom's response to the killing of a Jordanian citizen by an Israeli police officer he was stabbing.

Foreign Minister Ayman Safadi made his response at a press conference in Amman with his Egyptian counterpart, Sameh Shukri and Saeb Erekat, the secretary-general of the Palestine Liberation Organization Executive Committee.

L–R: Sameh Shukri, Ayman Safadi, Saeb Erekat
“Jordan is and was a voice of reason and peace. Our positions against violence and terrorism are clear to everyone,” Safadi said, adding that King Abdullah II is “invested in establishing security, peace and freedom for the Palestinians.” Safadi then spoke on behalf of all three, saying, "The leaders of Jordan, Egypt and Palestine, through recent separate meetings with US President Donald Trump, were impressed by US commitment to resolving the conflict and achieve peace in the Middle East." Addressing Trump, Safadi said that they stressed that east Jerusalem should be the capital of the Palestinian people, while west Jerusalem should be the capital of Israel, though he warned that matters involving Jerusalem should always be heavily and carefully considered and involve both sides.

US President Donald Trump (Photo: AFP)
On Palestinian prisoners in Israeli jails, the Jordanian, Egyptian and Palestinian officials called on Israel to "meet the fair humanitarian demands of Palestinian prisoners as per relevant international laws and conventions." The diplomatic spat between Israel and Jordan erupted yesterday in the wake of a stabbing attack in Jerusalem, in which a Jordanian man on a tourist visa, Mohammad Abdullah Salim al-Kasji, stabbed an Israeli police officer, who managed to shoot Kasji dead.
Footage of the attack    (Credit: Israel Police)
X

Amman in response called the incident “a terrible crime,” and demanded details about the incident from the Israeli government. Later that day, Netanyahu’s office released a statement calling the Jordanian reaction “outrageous,” and said Amman appeared to be backing terrorism.