Trump wants to establish his status as the leader of the free world in Riyadh
Photo: AP 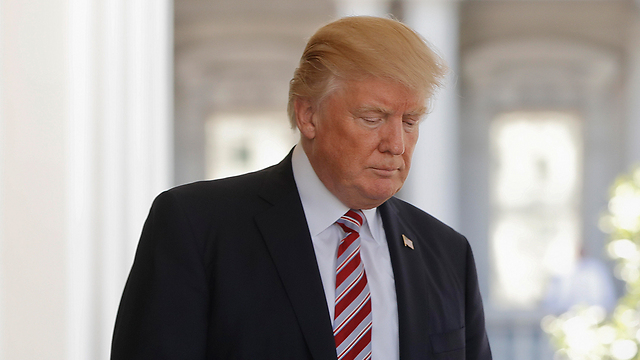 Analysis: The Israeli Right—which rejoiced upon Donald Trump’s election, called him Israel’s greatest friend ever and expected the settlement construction freeze to be cancelled—is now facing a different reality. The US president is a shrewd businessman who is trying to erase his domestic failures so far by reaching a historic Israeli-Palestinian agreement which will have his name all over it.

WASHINGTON—US President Donald Trump has a clear advantage over his predecessors in his upcoming visit to the Middle East: He is free of prejudice, he isn’t committed to anyone, he disregards details, precedents and memos, he adopts the opinion voiced by the last person who whispered in his ear, he overturns decisions, he cancels meetings and summons others, he asks for a brief version of everything, on the slogan level, which doesn’t stop him from changing the plans and turning the tables shortly afterwards. What was true yesterday is irrelevant today.

His predecessors had deep knowledge: Bill Clinton was able to draw every alley in Jerusalem on a napkin to indicate where Israeli sovereignty will begin and end in a future agreement. Barack Obama thoroughly understood the Israeli anxieties and the Palestinian aspirations. George W. Bush knew what he was talking about too. They all failed when they reached the main obstacle called the 1967 borders.

Trump is running a White House that has spiraled out of control, where there is a mixture of madness and chaos, but he stands tall when it comes to the ultimate deal he wants to achieve between Israel and the Palestinians. Perhaps in the place where the experts have crashed, the man who knows nothing about anything will manage to do something with the tricks of a businessman who hates fussy arguments and whines about deprivation. In order to succeed, however, he will have to make everyone cave in.

Trump is not coming to our neighborhood to win people’s hearts; he is coming to cash in on the situation (Photo: AP)

The Israeli Right—which rejoiced upon his election, which lauded him as Israel’s greatest friend ever, which was convinced that the construction freeze in Judea and Samaria was about to be cancelled, which stated that Obama was history and that the relations between the White House and Jerusalem were entering a honeymoon—is now facing a different reality. The American president is on his way, but the messiah isn’t coming. The person who is coming is a shrewd businessman who is trying to erase his domestic failures so far by reaching a historic agreement which will have his name all over it.

For years, Israel worked on marketing to the world the perception that the Israeli-Palestinian conflict is neither the obstacle to a regional reconciliation nor the cause of instability in the Middle East. Trump isn’t buying that approach. It’s no coincidence that he chose Saudi Arabia as the first stop in his visit: Trump likes the royal family members, because he likes rich people like him, although they are much richer. He is determined to do everything the opposite way Obama did things: His predecessor did not get along with the Saudis; Trump wants them as partners both in his peace deal and in business in general. He is bringing them a billion-dollar arms sale deal. The Saudis like guided bombs and shiny warplanes, and Trump likes to sell and make a profit, which the American arms industries need like air.

As for the peace deal he is concocting, Trump has already declared that he accepts extensive parts of the Saudi initiative, which his hosts in Riyadh are very proud of. He wanted a commitment from them that they would establish diplomatic relations with Israel. The Saudis made it clear that they would be willing to do so, but that Palestine came first and that flags would only be raised afterwards.

Trump, who strives to create a coalition of Sunni states under his leadership against the Islamic State terror, wants to establish his status as the leader of the free world in Riyadh. And since he is not driven by sentiments, the pressure he will put on Israel will be as heavy-handed as he is with everything else. Alongside the worn-out talk about the strong alliance and the guarantees for Israel’s security, he is expected to demand a restraint in construction in Judea and Samaria and flexibility towards the Palestinians, even before the negotiations begin. He will likely also evade his promise to move the American embassy to Jerusalem, at least not immediately.

Our great friend will arrive in the region without having any of the actors in the Middle Eastern show in his pocket, which creates hope that it may be the only way, with immoderate pressure, on the verge of coercion, to slam the parties’ heads together and do what seems like the theater of absurd at this stage: Comprehensive peace.

Trump is coming to our neighborhood, and he isn’t coming to win people’s hearts. He is coming to cash in on the situation big time, like a businessman eager to cut the ribbon. Perhaps that’s the right way to go.