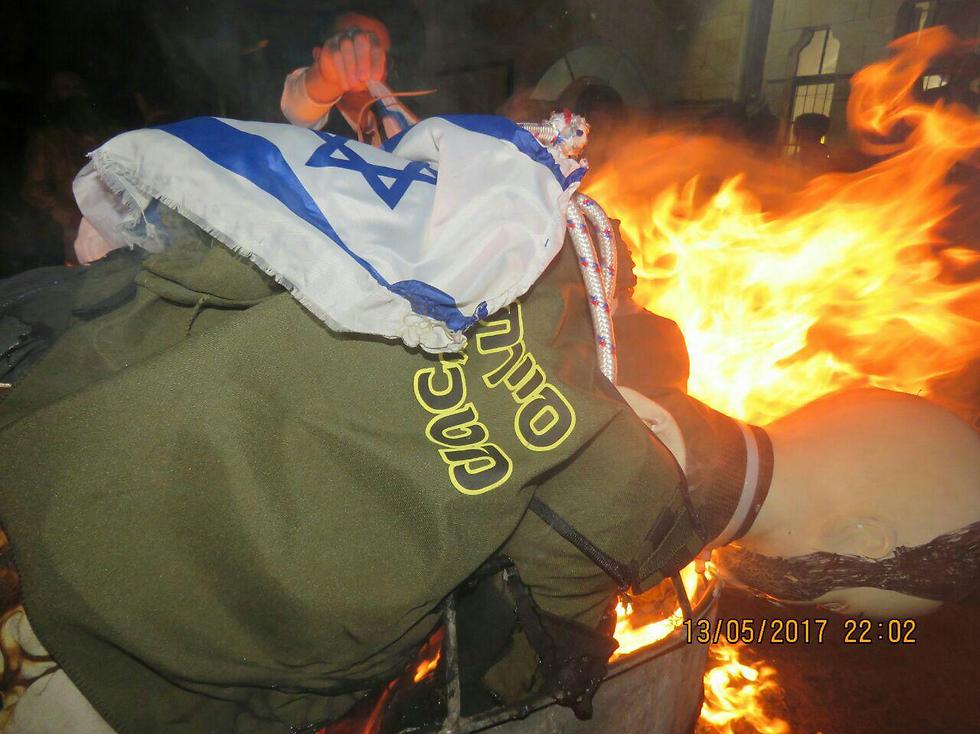 The police located three ultra-Orthodox men suspected of burning an Israeli flag in the Mea Shearim bonfire, into which effigies of IDF soldiers were thrown as well; a 21-year-old was arrested, a teen was detained for questioning and an 11-year-old boy was questioned.

Police located three suspects in the burning of an Israeli flag in a Lag B'Omer bonfire in Jerusalem. The three, aged 21, 15 and 11, took part in an event on Saturday night in the Mea Shearim neighborhood of the capital, where effigies of IDF soldiers were burned as well.

The Jerusalem police said that "since the Lag B'Omer events in Jerusalem, during which the police were informed about the burning of effigies in the form of IDF soldiers, the Israel Police is making extensive efforts, both openly and covertly, to locate those involved. The Israel Police will continue its determined activity until the suspects are found and prosecuted. "

The incident on Lag B'Omer was not the first of its kind in Mea Shearim. Two months ago, an effigy dressed like an IDF soldier was hung in the neighborhood. The fire fighters who came to the neighborhood removed the effigies and were attacked with stones and objects.

Shortly before the arrest, Minister of Public Security Gilad Erdan addressed the issue in the Knesset plenum: "I ask the police to fight this phenomenon with zero tolerance."

However, the minister put the blame on the Ministry of Justice, saying: "Unfortunately, due to the history of the State of Israel, the decisions regarding offenses of incitement to violence, expression of opinion, freedom of speech, etc. are not under the police's jurisdiction. They would very much like to bring such culprits to justice but it has no authority, it cannot make arrests and cannot investigate."