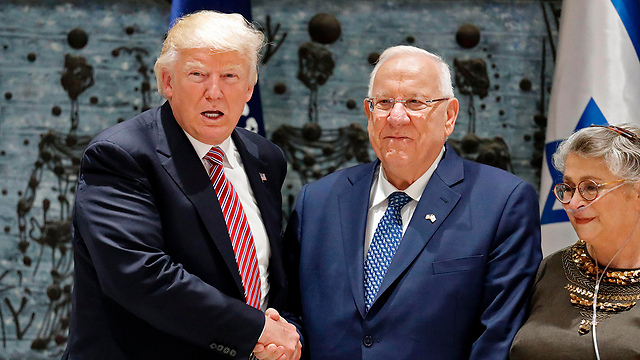 President Rivlin raised the issue with President Trump during their meeing Monday at the president's residence in Jerusalem; the Goldin family thanked Rivlin for the emotional gesture.

President Reuven Rivlin asked President Trump during their meeting to personally intervene and work to have the bodies of Lt. Hadar Goldin and Oron Shaul returned to Israel for burial.

Rivlin also presented the president photos of the two young men, whose remains are currently being held by Hamas in the Gaza Strip.

Rivlin and Trump meeting at the President's residence (Photo: AFP)

Dr. Leah Goldin and Prof. Simha Goldin, Hadar's parents, thanked Rivlin for the emotional gesture and for raising the sensitive issue with the president during his visit to Israel.

"President Donald Trump is following a new line and building relations between the countries of this region and Israel. In this framework, the return of Oron and Hadar must be the first display of seriousness and credibility," said the parents.

The Goldin family further added, "The return of Oron and Hadar, held by Hamas in Gaza, is first and foremost a humanitarian act. In preparation of the holiday of Ramadan this coming Friday, we expect the leaders of the Sunni countries to show compassion and goodwill on this issue."