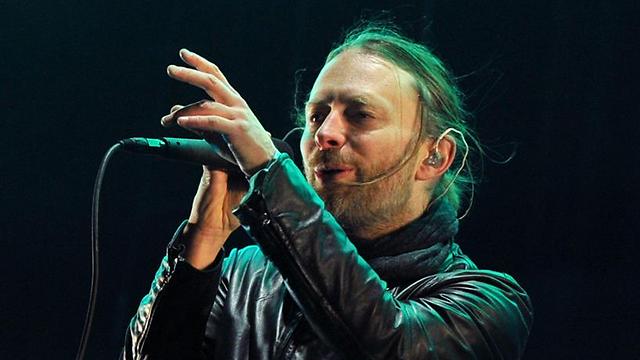 For the first time since being criticized for their decision to perform in Israel, singer-songwriter of Radiohead Thom Yorke explains their objection to the ban, saying that the criticism against them is 'patronizing in the extreme' and calling the ban 'divisive' and unhelpful; Yorke: 'that's how you get Benjamin Netanyahu. That’s how you get Trump.'

English musician and composer Thom Yorke, best known as the singer and songwriter of the alternative rock band Radiohead, has responded for the first time to the criticism against his band's decision to perform in Tel Aviv, Israel on July 19.

In an interview with American magazine Rolling Stone, Yorke addressed the BDS organization's attempts to prevent the scheduled concert, calling it "divisive" and "patronizing."

Thom Yorke (Photo: Gettyimages)
"I'll be totally honest with you: this has been extremely upsetting," said Yorke to the Rolling Stone interviewer. "There's an awful lot of people who don't agree with the BDS movement, including us. I don't agree with the cultural ban at all, along with J.K. Rowling, Noam Chomsky and a long list of others." Yorke said this in response to an open letter, which was organized by Artists for Palestine UK and signed by 47 cultural figures, urging the band to reconsider performing in a country "where a system of apartheid has been imposed on the Palestinian people." It also claimed the band was operating with double standards after they supported Tibet’s bid for independence. “In asking you not to perform in Israel, Palestinians have appealed to you to take one small step to help pressure Israel to end its violation of basic rights and international law,” the letter read. “There are people I admire (who have been critical of the concert) like (English film director) Ken Loach, who I would never dream of telling where to work or what to do or think,” said Yorke, after the director said the band should cancel their Israel concert “for their own self respect”.
Roger Waters on Radiohead's decision
X

"The kind of dialogue that they want to engage in is one that's black or white. I have a problem with that," Yorke explained. "It's deeply distressing that they choose to, rather than engage with us personally, throw shit at us in public," the Radiohead frontman continued. "It's deeply disrespectful to assume that we're either being misinformed or that we're so retarded we can't make these decisions ourselves. I thought it was patronizing in the extreme. It's offensivem and I just can't understand why going to play a rock show or going to lecture at a university (is a problem to them)."

"The university thing is more of a head fuck for me," added the musician. "It's like, really? You can't go talk to other people who want to learn stuff in another country? Really? The one place where you need to be free to express everything you possibly can. You want to tell these people you can't do that? And you think that's going to help?" Yorke seemed even more offended on account of his band mate, saying that "the person who knows most about these things is (Radiohead guitarist) Jonny (Greenwood). He has both Palestinian and Israeli friends and a wife who's an Arab Jew. All these people to stand there at a distance throwing stuff at us, waving flags, saying, 'You don’t know anything about it!' Imagine how offensive that is for Jonny."

Jonny Greenwood (Photo: Getty Images)
Yorke then panned BDS, who he believes "assume that we know nothing about (the Israeli-Palestinian conflict)" just because they decided against supporting their mission. "Just to throw the word 'apartheid' around and think that's enough. It's fucking weird," he said. "It's such an extraordinary waste of energy. Energy that could be used in a more positive way." "This is the first time I've said anything about it," said Yorke, explaining his hesitations to speak out. "Part of me wants to say nothing because anything I say cooks up a fire from embers. But at the same time, if you want me to be honest, yeah, it's really upsetting that artists I respect think we are not capable of making a moral decision ourselves after all these years. They talk down to us and I just find it mind-boggling that they think they have the right to do that. It's extraordinary." To summarize the reason for his decision, Yorke clarified his apprehension of the boycott. "All of this creates divisive energy," he said. "You're not bringing people together. You're not encouraging dialogue or a sense of understanding. Now if you're talking about trying to make things progress in any society, if you create division, what do you get? You get fucking Theresa May. You get Netanyahu, you get fucking Trump. That's divisive."