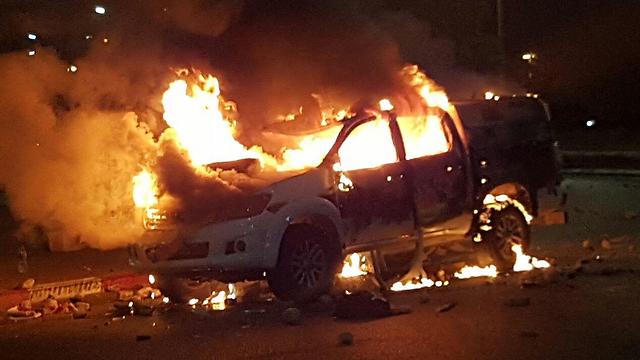 Protester killed after riot breaks out in Kafr Qasim

Civilian security guard at local police station says he feared for his life when hundreds of people started throwing rocks and tried to set the station on fire; he opened fire, killing a 27-year-old man; the rioting erupted late Monday following the arrest of a wanted person.

A protester was shot dead by a civilian security guard during violent riots that broke out Monday night in Kafr Qasim. Police said the guard opened fire because he felt his life was in danger.

The protester was identified as 27-year-old Muhammad Taha. His father, Mahmoud, told Ynet, "My son was murdered. Lately the police's finger is very light on the trigger, and they shoot quickly, especially when it comes to an Arab."

The father rejected the police's claims, saying his son "did not pose a danger at all. (Even) if he did, they should have shot him in the leg, not three times in the head. (The security guard) shot to kill, not to (defend himself)."

"My son is the victim of the police's hatred; they are a danger and a threat to the Arab sector," the father added. "He was my eldest; he got married two years ago and planned on having children. My heart, his mother's, his brothers' and sisters' hearts are broken. The man who did this ruined our lives, destroyed the life of an entire family and of his wife, and I hope God will ruin his life in return."

The violent clashes began around 11:30pm local time, when a police force stopped a resident of Kafr Qasim at the entrance to the city for a random check. The check revealed the resident, a municipal employee, was wanted for questioning and the force sought to arrest him.

Police say he resisted arrest and attacked the policemen. About 50 people managed to help him escape, but the police force managed to apprehend the suspect a few minutes later.

The force then came under a barrage of stones thrown at them and their police van. One of the rioters was arrested and the police force left the city with the two suspects.

After this incident, hundreds of rioters, some masked, gathered at the entrance to the city, where they started throwing stones at the local police station and torched three police cars. They also tried to set fire to the station itself.

A civilian security guard who was at the police station during the rioting opened fire at the rioters, critically wounding Muhammad Taha. Taha was taken to Rabin Medical Center in Petah Tivka, where he was pronounced dead. The police opened an investigation into the circumstances surrounding the death.

Shortly thereafter, a large police force was sent into the city to disperse the rioters.

Police said it kept in contact with the local leadership throughout the incident in an attempt to calm down the situation, but city officials were unable to quell the rioting.

Police Commissioner Roni Alsheikh held a situation assessment with the Central District during the night. He also met with Arab MKs and the mayor of Kafr Qasim as part of his efforts to maintain discourse with the Arab leadership.

"The Israel Police view the unrestrained riot with great severity. All lawbreakers will be brought to justice," the police said in a statement.

Rioter hanging on the hood of a driving police car
X

Rioter hanging on the hood of a driving police car

Members of the High Follow-Up Committee for Arab Citizens of Israel met in the wake of the riots, determining calm would be declared on condition the police release the two people it arrested, hand over the body of Muhammad Taha to his family and withdraw their forces from the city. The committee also demanded the removal of the commander of the local police station.

The committee decided to hold a general strike in the Arab sector on Wednesday, which would include schools, businesses and public services. In addition, the committee called for a protest on Saturday in Kafr Qasim.

The burnt patrol car, the aftermath

"We will not be silent, there is no place for the police here, we do not want it," one of the protesters said. "They only pretend; the police have failed to do their job."

Kafr Qasim's mayor Adel Badir told Ynet, "When I heard residents were walking towards the police station, I immediately went out with a local ambulance to maintain public order. When I got there, I told the police that I was here to protect them, tried to calm them down, and promised nothing would happen. We planned to evacuate the policemen safely to a nearby house through a side door, but they refused, and said they will do it themselves. The police wanted to demonstrate power to restore order, although it could have been done in a different and quieter way."

Badir added that "no one here is looking to murder or lynch anyone. All we want is order. We stood by the policemen to ensure neither side got hurt."

Officials in Kafr Qasim said the riots broke out, among other things, over the wave of murders in the city. Mayor Badir has declared a strike in educational institutions in the city, saying it would last until arrests are made in the murders.

Kafr Qasim schools have been closed for the past two days, according to the mayor, who said if there was no change in the situation, the next school year would not start.

"We have declared war against crime and criminals," Badir said a few days ago at a meeting organized by the Follow-Up Committee for Arab Citizens of Israel.

Six people have been killed in Kafr Qasim over the past two months: Mustafa Amer, 52, and his son Alaa, 30, were shot to death in a family car lot; Hikmat Amer, 55, was murdered inside a shop; Ahmad Badir, 28, was murdered at the entrance of the Bilal ibn Rabah Mosque; and last week, Muhammad Amer, 35, and Fadi Sarsour, 35, were killed after they were shot by unknown perpetrators while leaving a mosque.