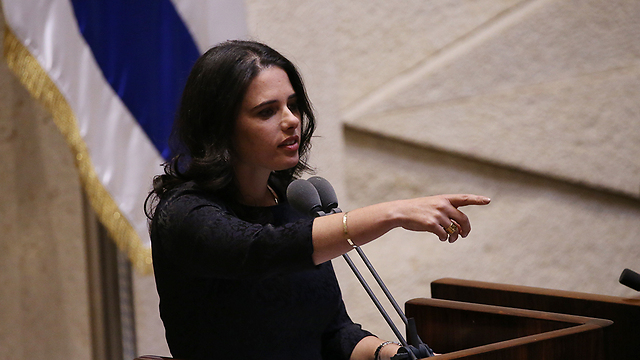 Op-ed: If Justice Minister Shaked implements only 10 percent of her agenda, Israelis will find themselves living in a completely different country.

Justice Minister Ayelet Shaked is on a roll. Even if she implements only 10 percent of her agenda, we will find ourselves living in a completely different country.

Last week, during a Knesset House Committee discussion marking 50 years since the Six-Day War, Shaked announced her plan to change the legislation so starting June 1, “the residents of Judea and Samaria, who are citizens of the State of Israel, will be included in all governmental bills.”

According to Shaked, settlers have been included in only five bills in the past two years, and there is a need for equality between citizens on both sides of the Green Line.

Justice Minister Ayelet Shaked. ‘Judea and Samaria residents will be addressed in all governmental bills from now on’ (Photo: Alex Kolomoisky)
I asked her what she meant.

"Today, when a law is enacted, it does not apply to Judea and Samaria, unless it is turned into a ‘tzav aluf’ (a military order signed by a general)," she explained. "For example, the Plastic Bag Law, which imposes a 10-agorot fee on each plastic bag. In Gush Etzion, they kept giving out plastic bags for free, because the law doesn't apply there. There are many laws that don’t apply there, because the Defense Ministry was supposed to examine every law and validate it through a ‘tzav aluf,’ but they don’t have the manpower to do it.”

Well, the justice minister is likely not losing sleep over the Plastic Bag Law.

Shaked avoided making any bombastic statements. “The desire is to compare, to normalize,” she says. “Normalization, that’s the right word. If we had started with primary legislation—in other words, added a clause to every law that was enacted by the Knesset this year, stating these laws apply to Judea and Samaria as well—that would have been called applying sovereignty. “What (Tourism Minister) Yariv Levin and I did,” she said, “is we sent letters to all the ministers and asked them to address the situation of Judea and Samaria’s residents in every governmental bill from now on.”

I’m not sure, I said, that the settlers are interested in comparing their legal system to the one within the Green Line. I think they would rather keep their own legal system.

“The residents want equal rights and equal duties,” she said. “Being controlled by a Civil Administration worker is not that great. If only you had heard what was said at the House Committee. Levin, for example, said that the Civil Administration should be dissolved. Having a government worker run all of this is insane.”

The question is whether the law applied in Judea and Samaria will include the Arab residents as well.