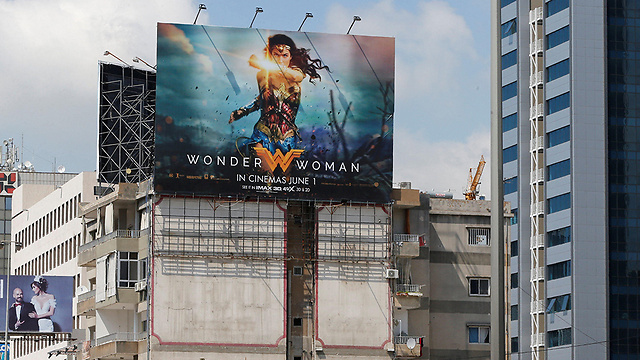 After Lebanon boycotted the film and Tunisia decided to temporarily ban it over the fact that it stars Gal Gadot, an Israeli who served in the IDF, Jordanian Communications Ministry allows movie theaters to screen it.

After much deliberation, the Kingdom of Jordan has decided not to bar movie theaters from screening the film Wonder Woman, starring Israeli actress Gal Gadot.

Lebanon pulled the movie at the last minute as a result of pressure by the BDS Movement, while Tunisia issued a temporary ruling against the screening of the film.

Objections arose to the movie in Jordan as well, with claims being made screening it would mean "normalization with Israel."

Wonder woman placard in Beirut, Lebanon (Photo: Reuters)
The Jordanian parliament's National Guidance Committee, which has been leading the opposition to the movie, met on Sunday with the Minister of Communications and Information, Mohammad al-Momani, to hear from him why the film was approved for screening in the country. The committee members were unconvinced, however. "The content of the film is not consistent with the Arab culture and Jordanian culture in particular," the committee said, and even claimed Gadot, who served in the IDF, expresses her hatred through filmmaking. They also wrote to Prime Minister Hani Al-Mulki, asking him to prevent the screening of the film in the country.

According to him, "the citizenship of the actor" cannot be grounds for preventing the screening of any film, as many other films should be banned if that were the case.

"Jordanian culture is deeply rooted and cannot be influenced by any film, whatever its positions," the minister said.

He also argued the decision to prevent or allow artistic content such as films cannot be made based on the whims of politicians, but in accordance with what the law stipulates.

The director of the Communications Ministry's committee, Mohammed Al-Kutishat, also tried to explain the decision to screen the film, noting that there were 16 films screen in Arab countries that starred Israeli actors.