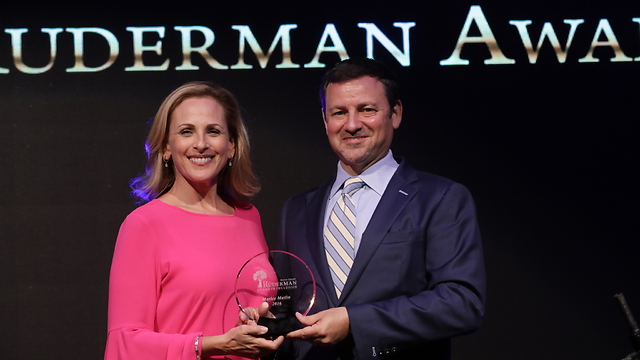 The only deaf actor to win an Academy Award thus far, Marlee Matlin, is honored by the Ruderman Family Foundation Monday evening in Tel Aviv for her many years of advocacy in disability inclusion.

Academy-Award winning actress Marlee Matlin was honored Monday night in Tel Aviv with the Morton E. Ruderman Award in Inclusion, a $100,000 prize for her lifelong activism for people with disabilities, with Prime Minister of Israel Benjamin Netanyahu also sending along his congratulations.

"I join the Ruderman Family Foundation in commending you for your dedication to helping children and adults with disabilities and illnesses while pursuing your illustrious career in the performing arts. Your many years of success are an inspiration to us all." Netanyahu wrote in a letter to Matlin. The award, now in its fourth year is given to individuals who have displayed an exemplary commitment in fighting for equality for people with disabilities.

In attendance at the event was Israel's first minister for social equality, Gila Gamliel, among other Israeli actors, philanthropists, government office representatives, and nonprofit executives. The night also included The Voice contestant, Nitzan Shayer, who is a wheelchair user, performing while interpreters signed the lyrics on either side of the stage.

A short video also showcased Matlin's achievements in the performing arts, her impact on disability inclusion and the tasks that have yet to be completed. Matlin has forged a successful career as an actress, refusing to let her disability restrict her from achieving her dream. She has acted in over 60 films and television programs in her career, and has written an autobiography titled, "I'll Scream Later" released in 2009. Outside of "Children of a Lesser God," Matlin might be best known for her role in "The West Wing," where she starred in seventeen episodes across all seasons. "No matter what barriers we face, I believe we all have a unique gift to share," said Matlin while accepting the honor. "I also believe we have an obligation to impact the world, beyond what society thinks we can and can't do, particularly on behalf of those who don't have access to the resources to realize their dreams or help themselves. It's unfortunate that for every step I've taken forward, there are still millions out there who face discrimination, misunderstanding and rejection." During her first visit in Israel, the Jewish actress will continue touring the country and hold meetings with a wide-range of officials and activists, including people with disabilities from the Arab sector in Nazareth and a meeting with heads from Israel's entertainment industry on how to better include people with disabilities in their shows and movies. Matlin will also meet with over 300 people from Israel's deaf community, in addition to young adults with disabilities, while also taking trips to the Western Wall and the Knesset. Jay Ruderman, president of the Ruderman Family Foundation, who was in attendance at the ceremony, commented: "It is exciting for the foundation to bring an accomplished Jewish actor on her first visit to Israel. We believe that she will be in inspiration to the growing and powerful disability community in Israel." In years prior, the award has gone to advocates from across the spectrum, including former Iowa senator and driving force behind the Americans with Disability Act, Tom Harkin, disability rights advocate, Ari Ne'eman and director of the Harvard Law School Project of Disability, Dr. Michael Stein.