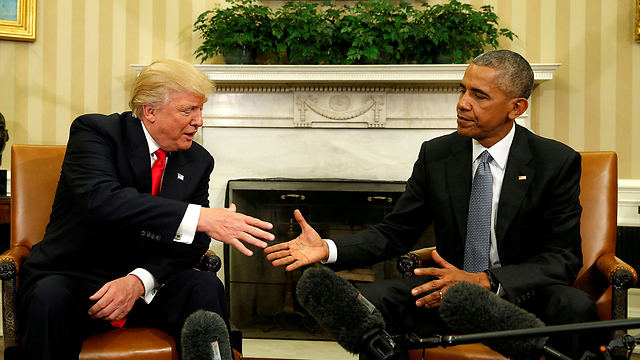 Report: Obama did not release Russian hacking info. as he bet on Clinton win

Then-US pres. Obama knew Russia was tampering with US elections to assist Trump but chose not to go public, according to Washington Post; Obama's decision relied on Clinton's expected win and fear he would seen as influencing elections himself.

The intelligence shocked the White House and put US security chiefs on a top-secret crisis footing to figure out how to react.

According to the Post, then-President Barack Obama decided not to go public with the information amid confidence that Democrat Hillary Clinton still had the election in the bag and worries over Obama himself being seen as manipulating the election. Instead, the administration delivered warnings to Moscow but left countermeasures until after the vote.

After Trump's shock victory, there were strong regrets among administration officials that they had shied from tough action. "From national security people there was a sense of immediate introspection, of, 'Wow, did we mishandle this,'" a former administration official told the newspaper. The Post further reported that as soon as the intelligence on Putin came in, the White House viewed it as a deep national security threat. A secret intelligence task force was created to firm up the information and come up with possible responses. By the time the report landed on Obama's desk, WikiLeaks had already published the embarrassing revelations from the hacked Clinton emails. Since they could not unring that bell, the administration decided to focus on whether Moscow could disrupt the November 8 vote itself by hacking voter registration lists or voting machines, thereby undermining confidence in the vote tally itself. Worried about making the situation worse, the administration put off retaliating, and instead delivered stiff warnings directly to the Russians not to go farther. Officials told the Post that at least four direct warnings—Obama to Putin, spy chief to spy chief, and via top diplomatic channels—appeared to have an impact. They believe that Moscow pulled back on any possible plans to sabotage US voting operations.

"We made the judgment that we had ample time after the election, regardless of outcome, for punitive measures," a senior administration official told the Post.

Options to retaliate were on the table early: more crippling sanctions on the Russian economy, leaking information that would embarrass Putin diplomatically, and launching cyber attacks on Russian infrastructure were high on the list. But Trump's shock victory dampened the response. Obama took modest measures at the end of December, expelling 35 Russians and adding to existing sanctions. He also, according to the Post, authorized a plan to place cyber attack implants in the systems of critical Russian infrastructure. But it remains unclear, the Post said, whether Trump has followed through with that. Trump on Friday questioned Obama's response to the Russian hacking crisis. "Just out: The Obama Administration knew far in advance of November 8th about election meddling by Russia. Did nothing about it. WHY?" he posted on Twitter. In an interview with Fox News program Fox and Friends that will air on Sunday, Trump groused that Obama's response did not get more media coverage. "The CIA gave him information on Russia a long time before they even—before the election. And I hardly see it. It's an amazing thing," Trump said in an excerpt released by the program last evening.

Trump had previously acknowledged that Russia likely tried to interfere in the election, but has denounced investigations into possible Russian collusion with his campaign as a "witch hunt."