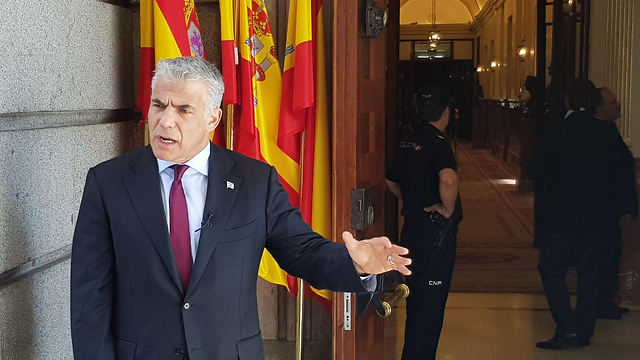 Addressing a special session of the Spanish parliament, the Yesh Atid leader presents report to lawmakers demonstrating extent of Spanish finances pumped into groups dedicated to boycotting Israel, often with ties to terror groups; ‘It is up to you. It is your country, and it is your money.’

Spain must stop funding anti-Israel NGOs, Yesh Atid leader Yair Lapid told the Spanish Congress of Deputies in Madrid on Wednesday. Addressing a special session of the Spanish parliament, Lapid presented lawmakers with a comprehensive report showing millions of euros that have been used to finance Boycott, Divestments and Sanctions (BDS) groups that have aligned themselves with terror organizations responsible for murdering Israeli civilians.

“Israel faces terrorism in the form of knives and guns, always aimed at the weakest members of our society but in Europe, the weapon is lies,” Lapid said, referring to claims made about Israel by BDS activists.

“In 2015, nearly 5.1 million euros were transferred to sub-organizations affiliated with terrorist organizations, and we identify the names, the sub-organizations, the addresses, and you have the ability to stop it,” stated Lapid. “It is up to you. It is your country, and it is your money.”

The report, Spanish Funding to NGOs Active in the Arab-Israeli Conflict, was published last month by NGO Monitor, a Jerusalem-based watchdog, and ACOM, a pro-Israel Spanish group that has pressed charges against pro-BDS groups citing Spain’s anti-discrimination laws. The report details organizations that call for boycotting Israel, and emphasizes the groups’ ties with violence.

Yair Lapid in the Spanish parliament

“The patterns of Spanish funding … point to a distinct ideological trend against Israel, manifest in calls for its isolation, endorsement of violence against civilians, and the promotion of libelous distortions against Israeli entities and individuals,” says the report.

“All the Spanish NGOs (mentioned in the report) support BDS campaigns that target Israel economically, culturally, and academically, and all but one collaborate with Palestinian NGOs associated with the PFLP terrorist organization," it continued.

“Unfortunately, such hostile narratives are supported by government funding, and also amplified and legitimized via active participation of Spanish government officials and politicians in virulent events, under the banner of ‘human rights’ and ‘development,’” the report states in its closing sentences. “In this manner," it concludes, "Spanish commitment to development cooperation is exploited for the sake of regional political agendas, in clear defiance of official Spanish foreign policy objectives and universal principles of foreign aid.”