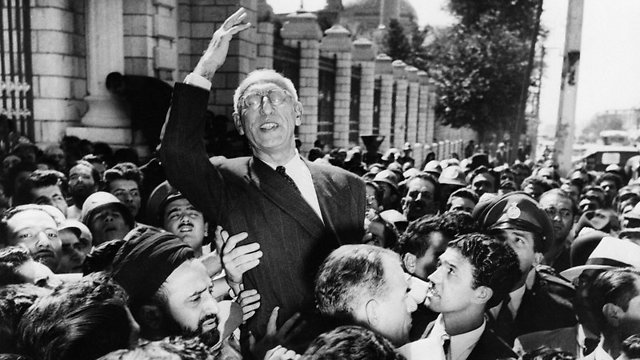 US quietly publishes documents outlining the US-backed 1953 coup in Iran and the toppling of Prime Minister Mohammed Mosaddegh, which were once expunged from its official history, offering a new glimpse at an operation that ultimately pushed the country toward its Islamic Revolution and hostility with the West.

Once expunged from its official history, documents outlining the US-backed 1953 coup in Iran have been quietly published by the State Department, offering a new glimpse at an operation that ultimately pushed the country toward its Islamic Revolution and hostility with the West.

The CIA's role in the coup, which toppled Prime Minister Mohammed Mosaddegh and cemented the control of the shah, was already well-known by the time the State Department offered its first compendium on the era in 1989. But any trace of American involvement in the putsch had been wiped from the report, causing historians to call it a fraud. The papers released this month show US fears over the spread of communism, as well as the British desire to regain access to Iran's oil industry, which had been nationalized by Mosaddegh. It also offers a cautionary tale about the limits of American power as a new US president long suspicious of Iran weighs the landmark nuclear deal with Tehran reached under his predecessor.

Prime Minister Mohammed Mosaddegh rides on the shoulders of cheering crowds in Tehran’s Majlis Square, 1953 (Photo: AP)
It exposes "more about what we know about this milestone event in Middle East history and especially US-Iran history. This is still such an important, emotional benchmark for Iranians," said Malcolm Byrne, who has studied Iran at the non-governmental National Security Archive at George Washington University. "Many people see it as the day that Iranian politics turned away from any hope of democracy." The 1,007-page report, comprised of letters and diplomatic cables, shows US officials discussing a coup up to a year before it took place. While America worried about Soviet influence in Iran, the British remained focused on resolving a dispute over the nationalization of the country's oil refinery at Abadan, at the time one of the world's largest. Many also feared further instability following the 1951 assassination of Premier Ali Razmara. "Nationalization of the oil industry possibly combined with further assassinations of top Iran officials, including even the shah, could easily lead to a complete breakdown of the Iran government and social order, from which a pro-Soviet regime might well emerge leaving Iran as a satellite state," one undated CIA analysis from the report warned. Out of that fear grew TPAJAX, the CIA codename for the coup plot. Papers show the CIA at one point "stockpiled enough arms and demolition material to support a 10,000-man guerrilla organization for six months," and paid out $5.3 million for bribes and other costs, which would be equivalent to $48 million today. One CIA document casually refers to the fact that "several leading members of these (Iranian) security services are paid agents of this organization." The CIA also described hoping to use "powerfully influential clergy" within Shiite Iran to back the coup, something that would be anathema by the 1979 Islamic Revolution. It offers no definitive proof of that, though several documents show American officials in contact with Ayatollah Abol-Ghasem Kashani, an anti-British leader in the Iranian parliament who turned against Mosaddegh. The agency faced problems, however, chief among them Shah Mohammad Reza Pahlavi himself. Diplomats and spies referred to him as a "weak reed" and "petulant." "His inability to take decisions coupled with his tendency to interfere in political life has on occasions been (a) disruptive influence," the US Embassy in Tehran warned in February 1953. Ultimately, his twin sister Princess Ashraf and a US general helped convince him. Mosaddegh was tipped off about the coup, and it appeared doomed as the shah fled to Baghdad and later Italy. But protests supporting the shah, fanned in part by the CIA, led to Mosaddegh's fall and the monarch's return. The report fills in the large gaps of the initial 1989 historical document outlining the years surrounding the 1953 coup in Iran. The release of that report led to the resignation of the historian in charge of a State Department review board and to Congress passing a law requiring a more reliable historical account be made. Byrne and others have suggested the release of the latest documents may have been delayed by the nuclear negotiations, as the Obama administration sought to ease tensions with Tehran, and then accelerated under President Donald Trump, who has adopted a much more confrontational stance toward Iran. Byrne said the new administration needed just two months to agree to release the documents. "That kind of speed is unheard of in the government unless there is some sort of political foundation," he said. Die-hard opponents of Iran's current government might look to 1953 as a source of inspiration. But the Americans involved in the coup acknowledged at the time they were playing with fire. Widespread Iranian anger over the heavy-handed Western intervention lingered for decades, and fed into the 1979 revolution, when Iranians seized control of the US Embassy and held those inside captive for 444 days. To this day Iran's clerical leaders portray the US as a hostile foreign power bent on subverting and overthrowing its government. As President Dwight Eisenhower wrote in his diary in 1953, if knowledge of the coup became public, "We would not only be embarrassed in that region, but our chances to do anything of like nature in the future would almost totally disappear."