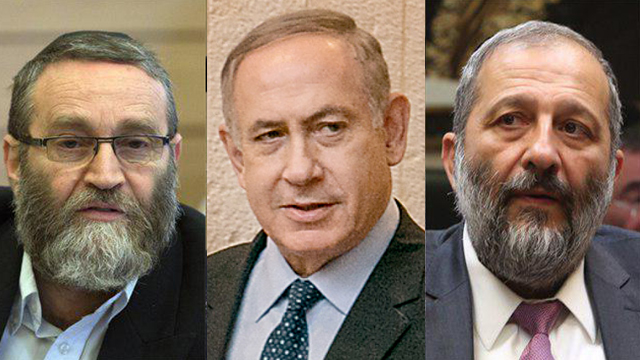 After Netanyahu announces newly passed Conversion Bill to be frozen for 6 months to allow deliberation on its validity, Interior Min. Deri says he will agree to that only if bill is passed even if court rules against it; after being refused, Deri and MK Gafni storm out in protest, and meeting is dispersed.

A meeting of coalition leaders convened Friday morning by Prime Minister Benjamin Netanyahu in an attempt to formulate an agreed-upon solution to the issue of the Conversion Bill broke down after Shas leader and Interior Minister Aryeh Deri and MK Moshe Gafni (United Torah Judaism) left the meeting in fury.

Thursday, senior coalition officials said that the proposed solution was to postpone the law by six months, and by then a public committee would be set up to formulate an agreed-upon solution to the issue of conversion.

L to R: Gafni, Netanyahu, Deri (Photo: Ohad Zwigenberg, Gil Yohanan)
At the beginning of the meeting, the prime minister made it clear that there was a great crisis with Diaspora Jewry, and he spoke about the sensitivity of the situation and said that the current direction would be to withdraw the petition filed against the law by American Jewry, and in return the law will be frozen. An argument then broke out between ministers Naftali Bennett (Bayit Yehudi) and Moshe Kahlon (Kulanu) and Netanyahu about his handling of the Conversion Bill. The two mentioned the fact that the government meeting on the matter at the beginning of the week had gone ahead without prior preparation and claimed that the announcement of the freeze in the Western Wall agreement felt like underhanded opportunism, as most ministers didn't even participate in that meeting. Bennett and Yisrael Beytenu leader Avigdor Lieberman then commented on the Conversion Bill, saying that chief rabbis should also be allowed to perform conversions.

Netanyahu made it clear that there was a need at this stage to freeze the law and ordered a joint statement to the government and Diaspora Jewry that would announce the arrangement.

"I very much hope that the High Court of Justice will accede to this joint request because it will calm things down and also open a door to hope for an agreed-upon arrangement among our people," Netanyahu said.

Bennett (L) and Kahlon (Photo: Olivia Pitosi)
At this stage, Deri said, "I am willing that the law be frozen for six months. If in the course of that time the High Court of Justice disqualifies the law, I request that we pass it anyway." Those present at the meeting refused to promise him such a thing, and he was furious: "I get what's going on here. You are acting contrary to a coalition agreement." Then Deri got up from his chair and stormed out with Gafni following him. Netanyahu called to them : "I do not understand why you got up. Why are you leaving?" The prime minister's question was ignored as the two walked out. The meeting was dispersed shortly thereafter. Gafni's office said at the end of the meeting,"There were clear agreements with the prime minister," and what was discussed in the meeting violated a coalition agreement, clarifying that they demand it will be held even if the court rules against it.

Kahlon wrote on his Twitter account after the breakdown of the meeting: "The national strength and the true security of the Jewish people lies in its unity. The connection between the people living in Zion and their brothers in the Diaspora is a strong and brave bond and we must guard it with care.

"In the past, the people of Israel paid dearly for the division of its people, and we must not return to that time. I expect all parties to convene again until we reach an agreed outline. "This is the time to act for the unity of the people."

Reform Jews pray at the Western Wall (Photo: AP)
The leaders of the AIPAC lobby and the heads of the American Jewish federations made it clear that the Conversion Bill is much more damaging to them than the Kotel agreement's freeze, because the issue of conversion touches nearly all Jews abroad. The government approved the conversion law on Sunday, which leaves the conversion rights only to the Chief Rabbinate. Leaving the monopoly of conversion in the hands of the Chief Rabbinate is in effect a step that bypasses the High Court of Justice and determines that only conversions of the state will be recognized for the purposes of the Law of Return. About a year ago, the High Court of Justice ruled for the first time that private Orthodox conversions (performed in accordance with stringent Jewish to law) should be recognized in Israel for the purpose of the Law of Return. In other words, if certain rabbis, who do not serve on behalf of the state, convert someone—he could register as a Jew to apply for citizenship.

The Jewish community fears that the law will prevent anyone who has converted abroad from receiving permits to immigrate to Israel since the rabbinate does not recognize them as Jews.

The Jewish Agency issued a statement on Friday, followng the the decision of Prime Minister Benjamin Netanyahu to postpone the Conversion Bill.

a number of ministers and other partners to resolve the crisis surrounding conversion have borne fruit. This effort, conducted in a spirit of understanding and a desire to reach a compromise, provides all parties of interest with a period of six months to reach a solution. We hope that the task force appointed by the prime minister will reach a conclusion that strengthens the unity of the Jewish people in Israel and the Diaspora," read the statement.

"The Jewish Agency also sincerely hopes that the spirit seen over the last two days will lead to the resolution of the issues surrounding the Western Wall, as provided by the agreement previously reached by all concerned."