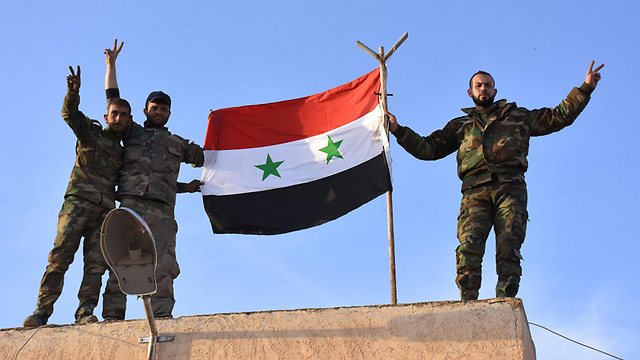 Islamic State under pressure as it loses last Aleppo stronghold

Syrian army reportedly succeeds in driving ISIS from last territory in Aleppo province; However, the Syrian Observatory for Human Rights states ISIS has retaken most of the industrial district of Raqqa after mounting counter-attack against US-backed alliance of Kurdish &amp; Arab militias.

The Syrian army reportedly managed to drive terrorist group ISIS from its last territory in Aleppo province on Friday, a Syrian military source said, in a strategically-important move that relieves pressure on a government supply route.

The SDF, the US backed alliance in Syria, took the industrial district of Raqqa this month in its biggest gain so far in its fight for ISIS's Syrian capital and if, as the Observatory has reported, ISIS has regained control there it would be a setback.

The SDF, on its social media feed, acknowledged there had been intense clashes, but added that the whole industrial district was still in its hands and the attack had been thwarted.

However, the Syrian Observatory for Human Rights, a Britain-based war monitor, said ISIS had retaken most of the industrial district of Raqqa after mounting a fierce counter-attack against the Syrian Democratic Forces (SDF), a US-backed alliance of Kurdish and Arab militias.

Even though ISIS is under pressure in these urban strongholds in Iraq and Syria its fighters still occupy an area as big as Belgium across the two countries, according to one estimate.

Across the border in Iraq, US-backed Iraqi forces pressed Islamic State fighters holding out in Mosul's Old City on Friday, while in Syria the militant group launched a counter-attack against an alliance of militias trying to oust it from its de facto capital of Raqqa.

In Iraq, dozens of civilians poured out of Mosul, long held by ISIS, and fled in the direction of the Iraqi forces, many of them women and children, thirsty, tired and some wounded.

Aleppo refugees (Photo: AFP)
Iraqi authorities said they are only days away from a victory over militants in their remaining redoubt in Mosul, though commanders of counter-terrorism units fighting their way through the narrow streets of the Old City said die-hard ISIS fighters are dug in among civilians and the battle ahead remains challenging.

In Iraq, grinding warfare in Mosul has displaced 900,000 people, about half the city's pre-war population, and killed thousands of civilians, according to aid organizations. Major General Maan al-Saadi, of the Counter Terrorism Service, told Reuters it could take four to five days to capture the insurgents' redoubt in Mosul by the Tigris River which was defended by about 200 militants.

Syrian army tank (Photo: AFP)
Tens of thousands of civilians are trapped in the city in desperate conditions, with dwindling supplies of food, water or medicine and no access to health services, according to those who have managed to flee. The capture of the city would in effect mark the end of the Iraqi half of the caliphate, although the group still controls territory west and south of the city, holding sway over hundreds of thousands of people. Those who escaped on Friday streamed through alleyways near the Grand al-Nuri Mosque, where ISIS leader Abu Bakr al-Baghdadi declared the caliphate in 2014 and which Islamic State fighters blew up a week ago rather than see it fall to the Iraqi army. Iraqi Prime Minister Haider al-Abadi declared the end of the caliphate on Thursday after CTS units captured the ground of the ruined 850-year-old mosque. A Reuters correspondent on Friday saw smoke billowing over the riverside districts amid artillery blasts and burst of gunfire. Western troops from the US-led coalition were helping adjust artillery fire with air surveillance, he said.