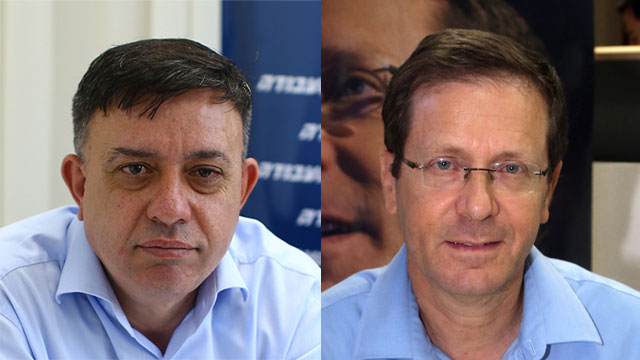 Despite clinching 11% more of the vote than incumbent party leader Isaac Herzog in the first round of the party primaries this week, Avi Gabbay says he is not obliged to relinquish his leadership regardless of whether he or front runner Amir Peretz emerges victorious; ‘Fairness requires that he continues his role. Herzog was elected with 24 seats.’

Avi Gabbay, one of the two candidates poised to take the helm of the Labor Party, said Thursday that the incumbent leader Isaac Herzog was not obliged to vacate the leadership for either him or front-runner Amir Peretz following the second round of primaries next week. “Herzog was elected with 24 seats and there is no obligation to replace him,” Gabbay said. “On the contrary, fairness and clear sightedness require that he continues his role and I would be happy if he were to agree to that,” he said in a statement. “I was asked about the matter of leading the opposition and the answer, as usual, is very simple. The job of the opposition chairman is not one that can be traded like currency.”

Gabbay’s comments came despite the fact that he and Peretz are set to go head to head in a second round of primaries for the party’s leadership contest after it was announced Tuesday night they had emerged victorious, with Gabbay trailing marginally behind his opponent.

“From the beginning I promised the public clear sightedness and fairness. I am not doing deals in the old way that brought Labor to the opposition. I am engaging in different politics and I call on everyone to join me,” Gabbay continued. “For me, the one promise is the changing of the government headed by Netanyahu.

“Immediately after the primaries we will strengthen Labor’s opposition work in the Knesset, but at the same time we will launch a campaign to bring new (members—ed) to the party,” Gabbay added as he mapped out his plans. “We will go to every place where it is possible to convince and less to those where people are already convinced. Obviously I call on Herzog, as I do to Omer Bar-Lev and Erel Margalit, to join me in order to replace Netanyahu. We are starting today a campaign for those who support us in order to remove Netanyahu.”

Amir Peretz (L) (Photo: Daniel Elior)
On Wednesday, Gabbay visited Herzog at his home where the two spoke for more than an hour-and-a-half. During the discussion, Gabbay asked for Herzog's backing and said that he viewed him as a partner. By the afternoon, Peretz had also arrived at Herzog’s house in a bid to solicit his blessing. However, Herzog has yet to reveal who he will be throwing his lot behind. Similarly, the other losing candidates have also kept their hand concealed for the time being. Nevertheless, Gabbay also made his way to Margalit’s home in Jerusalem on Wednesday, once again followed by Peretz in the latter’s home in Jerusalem.

But Gabbay has managed to secure the endorsement of former prime minister Ehud Barak who came out publicly in his corner in a video recording.

The next round of primaries will take place on July 10.

By Thursday afternoon, MK Shelly Yachimovich (Zionist Union) had announced her endorsement of Gabay, describing him as “exceptionally intelligent” and “brave.” Yachimovich also wrote on her Facebook page that Gabbay “will do better for my party and for the country.

“I have followed him closely for more than two years. His standing as a single cabinet minister against Netanyahu and against the corrupt gas deal is far more than a mere positive point of his past. It is an indication of the future.”