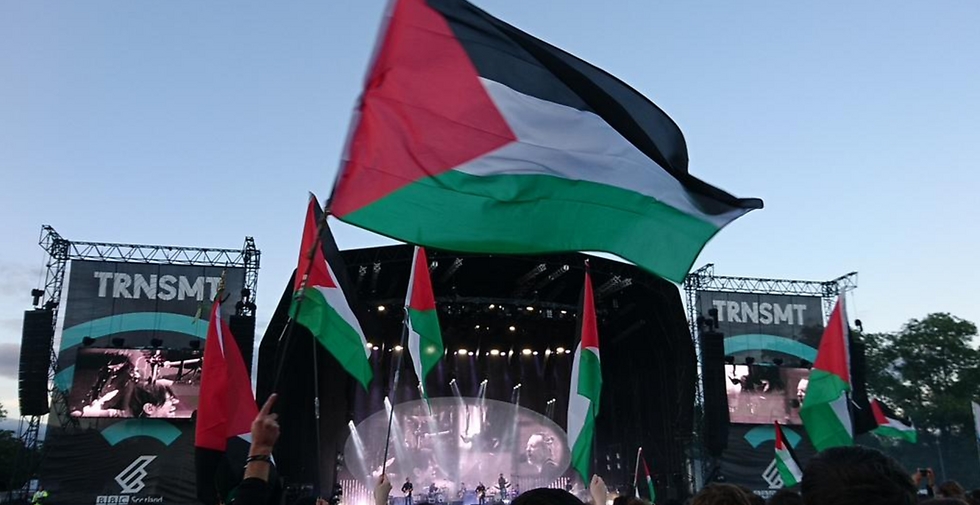 Radiohead—expected to arrive in Israel for a concert later this month—continues to draw ire from pro-Palestinian demonstrators waving flags and protest signs during a performance at a festival in Scotland; Frontman Thom Yorke responds with the middle finger.

Pro-Palestinian activists waved flags and banners protesting Radiohead's arrival in Israel on July 19th and called for a cultural boycott of the Jewish state during a performance at the Transmight Festival in Glasgow, Scotland.

Radiohead frontman Thom Yorke appeared angered by the protestors, according to fans in the audience.

Prior to the band’s performance of “Myxomatosis”, Yorke reportedly exclaimed, “Some fucking people!” while staring out into the crowd. He was also caught giving the middle finger to the flag wavers.

Thom Yorke (Photo: Lior Keter)
Yorke has expressed his agitation with the BDS before in an interview with American magazine Rolling Stone, addressing the boycott movement's attempts to prevent their scheduled concert in Israel by calling it "divisive" and "patronizing." "I'll be totally honest with you: this has been extremely upsetting," said Yorke to the Rolling Stone interviewer. "There's an awful lot of people who don't agree with the BDS movement, including us. I don't agree with the cultural ban at all, along with J.K. Rowling, Noam Chomsky and a long list of others." "The kind of dialogue that they want to engage in is one that's black or white. I have a problem with that," Yorke explained. "It's deeply distressing that they choose to, rather than engage with us personally, throw shit at us in public. "It's deeply disrespectful to assume that we're either being misinformed or that we're so retarded we can't make these decisions ourselves. I thought it was patronizing in the extreme. It's offensivem and I just can't understand why going to play a rock show or going to lecture at a university (is a problem to them)."