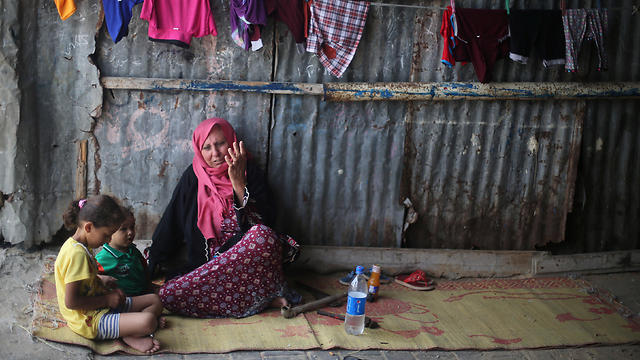 Ten years the Palestinian terrorist group seized power in bloody conflict, the territory is falling behind in almost all development areas with barely 3 hours of power a day and unemployment over 40 percent.

A decade after the Islamist group Hamas seized Gaza, the Palestinian enclave is effectively unlivable for its 2 million people, with declining incomes, healthcare, education, electricity and fresh water, the United Nations said.

In a report examining humanitarian conditions in the territory, which Hamas took over in June 2007 after a brief conflict with forces loyal to the Palestinian Authority, the United Nations concludes the situation in Gaza is deteriorating "further and faster" than was forecast only a few years ago.

"Across the board we're watching de-development in slow motion," Robert Piper, the UN coordinator for humanitarian aid and development for the Gaza Strip and the West Bank, told Reuters in an interview on Tuesday.

"Every indicator, from energy to water to healthcare to employment to poverty to food insecurity, every indicator is declining. Gazans have been going through this slow motion de-development now for a decade."

Immediately after Hamas took power, Israel moved to isolate the militant group by restricting the flow of goods and people in and out of Gaza, limiting access to the sea and working with Egypt to enforce a blockade.

At the same time, Hamas has been in near-constant dispute with the West Bank-based Palestinian Authority, prompting the PA to limit financial transfers to Gaza and, in recent weeks, asking Israel to cut back electricity supplies.

The upshot is that Gaza's population, which is projected to grow by another 10 percent in the next three years, is being squeezed on all sides, even as resources become scarcer.

"I see this extraordinarily inhuman and unjust process of strangling gradually two million civilians in Gaza that really pose a threat to nobody," said Piper.

Asked who was doing the strangling, he replied, "Everyone's having a go," mentioning internal Palestinian political strife, Israeli security policies that leave Gazans caught in the middle, and regional dynamics including pressure on Qatar, a major donor to Hamas, from Saudi Arabia and Egypt.

"That's the message in this report, the fundamental message: Someone has got to step back and put the interests of civilians at the top of the queue for a change," Piper said.

"We talk about the unlivability of Gaza. When you're down to two hours of power a day and you have 60 percent youth unemployment rates... that unlivability threshold has been passed quite a long time ago."

One of the most pressing challenges is power. Gaza needs at least 450 megawatts of electricity a day, but is now receiving 120 MW, partly because of the dispute between Hamas and the PA and a lack of internal power-generating capacity.

Piper sees ways in which conditions could quickly be improved without significant risk to Israel's security, including expanding the fishing zone off Gaza to 20 nautical miles from six currently. A freer flow of goods, including water pumps, elevators, wood, steel, cables and other electrical equipment, would also help.

Resolving the struggle between Hamas and the PA is essential in the long-run, but Piper says improving Gaza's health, education, sanitation and growth is critical for Israel as well.

"In the media, in the NGO community, and even in the Defense Ministry, you'll find plenty of thoughtful Israelis that will recognize that, firstly, the current trajectory is threatening for Israel's security and that a stable and prosperous Gaza... is also good for Israeli security," he said.