Metal detectors at the Temple Mount 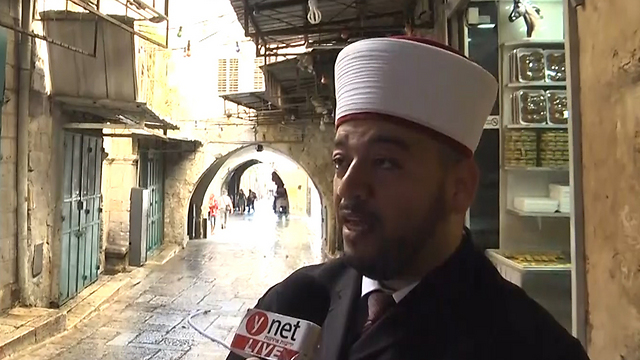 Senior Waqf officials not only refuse to condemn terror attack, but refuse to acknowledge it was in fact terrorism; refer to the attack as the 'event' and insist they do not know who is responsible.

As Israeli security forces reopen the Temple Mount complex Sunday, Waqf officials still refuse to acknowledge the deadly terror attack that had taken place there, while Arab MKs continue to assert Israel should have never closed the complex.

In an interview with Ynet, Raed Daana, a senior Waqf official, refused to label Friday's shooting attack as terrorism, referring to it only as an "event."

Despite the publication of the names of the terrorists and their home town, Daana insisted he did not know who was responsible.

"We don't have any details at the moment. We don't know who is behind this. We are against the killing of people. We just want to live in peace. I don't know who carried out this event," Daana insisted.

Gradual reopening of the Temple Mount

Daana did, however, refer to the decision to temporarily close the complex, saying, "The situation inside the Al Aqsa Mosque is unknown. We don't know what Israel is doing there. We know they brought six police vehicles and a large amount of officers. They have broken into all the offices, office after office, and broke the locked doors because they didn't have keys.

"We want to pray in our mosques, and we want to live in peace and security, but break-ins by settlers into Al Aqsa and their (police) operations do not give any Muslim rest. Take your hands off Al Aqsa and Jerusalem will live in peace. We don't want anything to happen in Al Aqsa that can harm this holy place and lead to its closure."

"Myself and MK Osama Saadi issued a clear and unequivocal statement that categorically rejected this act, as did MK Ayman Odeh and several other Arab MKs. I want to say clearly, directly and without stuttering that we strongly oppose this act.

"We have always said, for years, that the use of weapons by Arab youths from Israel is absolutely forbidden, our struggle is political and social."

Tibi did claim however, that there is a concerted effort to inflame tensions against Arab MKs.

"It’s the national sport of the right and left to come down against Arab MKs, but we are the discriminated victim. I am aware of the pain of a father who loses a son. It is especially real at a time when officials on the right are trying to incite to violence. We are all supposed to be united in this difficult time," said Tibi.

Eventually however, Tibi did toe the line other Arab officials have, lambasting the government for closing the site.

"The root of the problem is the occupation and foreign rule over the Al-Aqsa Mosque. East Jerusalem and the Al Aqsa Mosque are under occupation. We don't want anyone to get hurt. Not civilians and not police. In order for people not to be harmed, the root problem must be solved."

Meanwwhile, the director of the Al Aqsa Association said, "It is unacceptable that after every terror attack, all the Palestinians who live in the State of Israel will be accused of incitement. This is unacceptable to us. A holy place should be kept for prayer.

"This is a holy place. It is unacceptable for us that someone come into the mosque with a weapon. A holy place needs to be clean of blood and weapons. You want condemnation, you'll get condemnation. As long as there is provocation and chaos, the Al-Aqsa Mosque is sitting on a barrel of explosives."