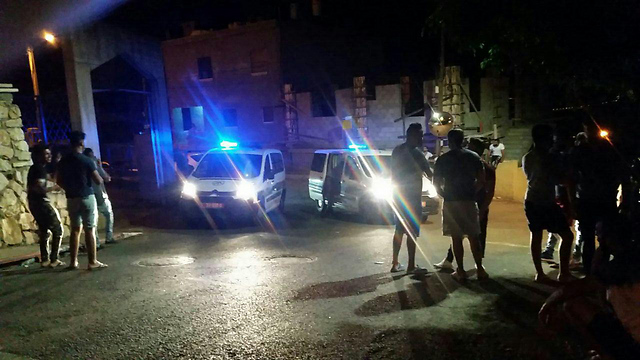 For the second time in three days, a stun grenade—now also accompanied by gunshots—is thrown into mosque in Maghar, the hometown of one of the policemen killed in Friday's shooting attack on Temple Mount; residents fear growing tensions between Druze and Muslims.

Unknown assailants fired gun shots and threw a stun grenade early Monday morning at a mosque in the Muslim neighborhood in the Arab town of Maghar, where Staff Sgt. Maj. Ha'il Satawi—the Druze policeman killed in the shooting attack on the Temple Mount compound on Friday—used to live.

There were no injuries and slight damage was caused to one of the windows in the mosque. The police opened an investigation and it was reported that "forces were deployed openly and covertly in order to maintain a sense of security and to prevent escalation."

Police forces arrive at the site of the incident
This is the second time in just three days where a grenade is thrown at the mosque in the days following the attack, and residents in the town are reporting increasing tensions and attempts to incite violence between the Druze and Muslim communities. "The situation is very tense," a resident of Maghar told Ynet. "I am a Muslim and I'm afraid to leave the house for fear that something will hurt me. It is very important that we calm things down, preserve the good relations and not get dragged after the people who are trying to incite." Dr. Mansour Abbas, a member of the Islamic Movement and a resident of Maghar, condemned the incident. "This is a serious and irresponsible act behind which stand people who represent only themselves and seek to harm the mosques, the churches and the entire village," Abbas said. "We are united in order to eradicate any attempt to harm our relations."

Police shines light into the damaged window of the mosque
The spiritual leader of the Druze community in Israel, Sheikh Mowafaq Tarif, also condemned the attack and demanded that the relations between the Druze and Muslims be properly maintained, noting that "the attack on the Temple Mount does not represent Arab society." MK Ayman Odeh (Joint List) supported Tarif's statement, congratulating him on his "responsible standpoint." "Every national, loyal person who loves his people must stand against any ethnic division and emphasize the things that bring the people together," Odeh said, adding that he keeps in contact with Tarif in order to maintain good relations between Muslims and Druze.

Satawi is survived by his three-week-old son, wife, parents and three brothers.