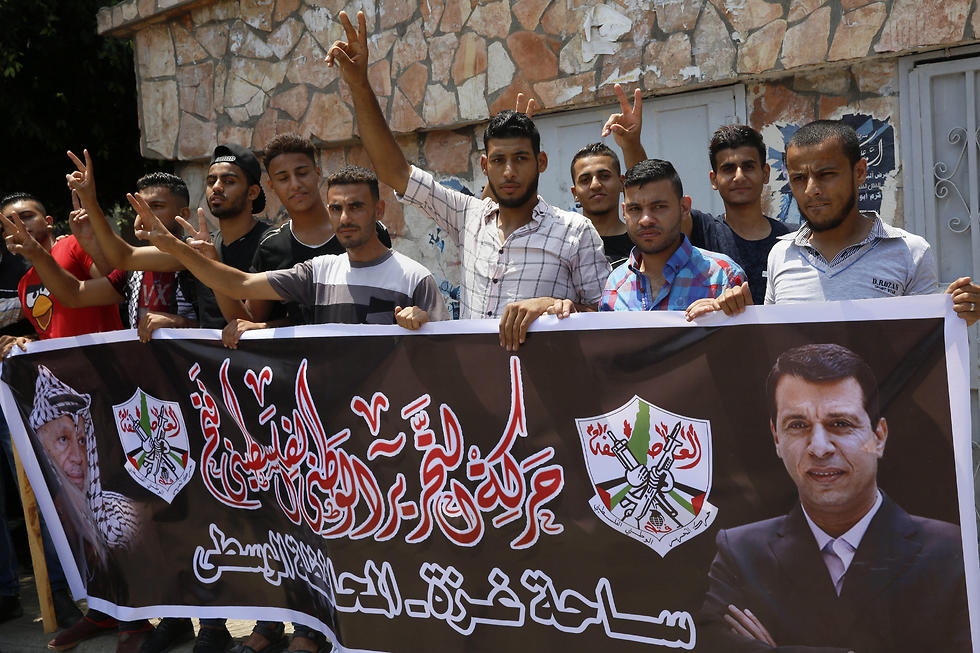 Power-sharing deal between two former arch foes slowly taking shape in Gaza and could lead to big changes in the Hamas-ruled territory, including easing of a decade-long border blockade.

A power-sharing deal between two former arch foes is slowly taking shape in Gaza and could lead to big changes in the Hamas-ruled territory, including an easing of a decade-long border blockade.

In the latest sign that the Egypt-backed understandings are moving forward, Hamas permitted more than 2,000 supporters of its former nemesis, Mohammed Dahlan, to stage a rally in Gaza City on Thursday. They held up banners with large photos of the ex-Gaza strongman and signs reading, "Thank you, Dahlan."

Supporters of Dahlan in the Gaza Strip

Dahlan backers also opened an office in Gaza last month as a springboard for political activity and began disbursing $2 million in Dahlan-procured aid from the United Arab Emirates to Gaza's poor.

All involved appear to benefit from the new deal for Gaza, described in detail by key players.

Egypt, which is battling Islamic extremist insurgents in the Sinai Peninsula next to Gaza, hopes to contain the Islamic militant Hamas through new security arrangements.

Dahlan, who was forced into exile after falling out with Palestinian President Mahmoud Abbas in 2010, is poised to launch a comeback and advance his Palestinian leadership ambitions.

Hamas gets a chance to prolong its rule with a promised easing of Gaza's stifling border blockade. Egypt and Israel had imposed the closure after Hamas seized Gaza in a violent 2007 takeover that included battles with forces loyal to Dahlan.

The three-way agreement between Egypt, Hamas and Dahlan aims to revive Gaza's battered economy and restore a sense of normalcy for 2 million Gazans, who have largely been barred from travel and trade for the past decade and have endured rolling power cuts, most recently of up to 20 hours a day.

Yet a stable Palestinian "mini-state" in Gaza could undermine long-standing Palestinian ambitions to set up an entity that is also meant to include the West Bank and east Jerusalem. Israel, which captured those territories in the 1967 Six Day War, withdrew from Gaza in 2005.

If Gaza stabilizes, Israel could argue that Palestinians already have a state there and face less international pressure to negotiate a broader peace deal. The Trump administration promised to try to revive statehood negotiations, but expectations are low and there's no sign the US has found a way to break the long-standing diplomatic impasse.

"The expected changes in Gaza are posing a big threat to the Palestinian national project," said analyst Ali Jerbawi, a former minister in Abbas' self-rule government.

The emerging Dahlan-Hamas agreement was made possible, in part, by the election of Yahya Sinwar as the new Hamas chief in Gaza in March.

Dahlan, 55, and Sinwar, 54, have known each other since boyhood. Both grew up in the same neighborhood of southern Gaza's Khan Younis refugee camp, attended the same UN school and later the territory's Islamic University, said Ahmed Yousef, a former Hamas official who also grew up in southern Gaza.

Their paths diverged when they joined rival political factions, Hamas and Fatah, where both became known for their ruthlessness.

Sinwar helped establish the Hamas military wing in the late 1980s, while Dahlan rose through the ranks of Fatah, becoming chief of a feared Gaza security service that used to shave heads of Hamas prisoners to humiliate them.

By early June, delegations led by Dahlan and Sinwar were negotiating in Egypt, and participants said the two men established an easy rapport. The recent shift in Hamas power from exile in Qatar to Gaza, a result of leadership elections, also helped the deal by speeding up decision-making.

Hamas spokesman Salah Bardaweel said this week that the deal with Dahlan and Egypt is moving forward.

Hamas, meanwhile, has been clearing brush to create a security buffer zone on the Gaza side of the border, and pledged not to give refuge to anti-Egypt insurgents from the Sinai.

Egypt is refurbishing the now largely closed Rafah crossing with Gaza, and is to reopen it by the fall for passengers and goods, Bardaweel said. The extent of future Rafah operations remains unclear.

Dahlan, who has strong ties with the United Arab Emirates, pledged to funnel tens of millions of dollars in Gulf aid to Gaza, Bardaweel said.

The money will be used to compensate the families of some 400 people killed in Fatah-Hamas clashes that preceded the 2007 Hamas takeover, he said. In June, a UAE-funded committee also began distributing aid to 30,000 needy families from a $2 million fund.

It remains unclear to what extent Dahlan would be involved in governing Gaza. Hamas will remain in charge of the security forces, while Dahlan is to serve as Gaza's advocate abroad.

Dahlan has no plans for now to settle in Gaza. However, his top lieutenants are to return to Gaza as early as next week and join those who remained in rebuilding his political organization.

Last month, they opened a new headquarters in Gaza City. During a visit Wednesday, the office was still sparsely furnished, lacking phones and computers.

Hamas and Dahlan's supporters will also try to revive the Palestinian parliament, defunct since 2007, in hopes of boosting their political legitimacy.

The 82-year-old Abbas has been watching the developments with alarm, seeking reassurances last week from Egypt in a hastily arranged trip to Cairo. If the deal goes forward, it would further undercut Abbas' claim that he represents all Palestinians.

Despite the apparent progress, both sides are cautious, taking small steps.

"We and Hamas are political rivals, but at the same time, we have common ground," said Sufian Abu Zaydeh, a pro-Dahlan lawmaker.

"There are obstacles on the ground, but we have to kick-start the reconciliation and cooperation to face the tough problems in Gaza," he said. "We are making real progress."