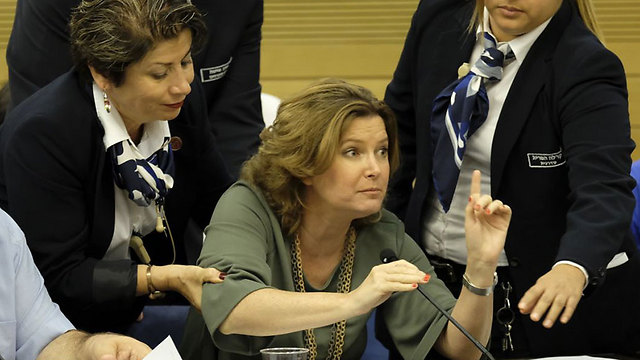 Knesset Joint Committee session on the Nationality Bill deteriorates into yelling, with several MKs being kicked out of the hall; proposed bill seeks to legally enshrine Israel as the nation state of the Jewish people.

A Knesset Joint Committee discussion on the contentious Nationality Bill got off to a rocky start Wednesday morning when MK Ahmad Tibi (Joint List) was removed by committee chairman MK Amir Ohana (Likud) after shouting that the proposed bill is racist.

Prime Minister Benjamin Netanyahu was originally slated to appear as well, but cancelled due to an "urgent security consultation."

During his comments on the importance of the Nationality Bill, Ohana said, "Whoever says this bill is racist, says Zionism is racist."

Ohana went on to say there are minorities in Israel like in any other nation state, including those who have tied their fate to the country.

Minister Levin spoke for Prime Minister Netanyahu, saying, "This law isn't intended to establish new things, but rather to anchor the obvious fact that the State of Israel is the nation state of the Jewish people.

"Since the enactment of the Basic Law: Human Dignity and Liberty and Basic Law: Freedom of Occupation, which put an emphasis on the democratic character of the State of Israel, a reality of imbalance has been created concerning the Jewish identity of the state."

Opposition chairman Isaac Herzog attacked Ohana, saying, "You are playing with fire. The State of Israel is the national state of the Jewish people, period. It is clear, it is written on the Declaration of Independence—a state that has a Jewish majority and an Arab minority, all equal citizens.

"The right wing has the greatest sense of insecurity about the future of the State of Israel because you want to get rid of the Palestinians. The Declaration of Independence calls for equality, but where is it in law? You're lighting a fire that could tear the country apart."

The nation state of the Jewish people

The bill was intended to anchor the status of the State of Israel as the nation state of the Jewish people in law. This includes legally enshrining Israel's democratic character, its state symbols, Jerusalem as the capital, Hebrew as the official language and the right of return for Diaspora Jewry.

The bill also seeks to grant the right to preserve the heritage of all residents of Israel, regardless of religion or nationality, and protect the holy places of all religions.

The bill also proposes to enshrine the Hebrew calendar as the official calendar of the state as well as adding Jewish and Israeli national holidays into the Basic Law. The proposal also states that Jewish law and the principles of Jewish heritage should serve as a source of inspiration for courts in their deliberations.

The proposal has drawn sharp criticism as a result of the need for the High Court to interpret Knesset legislation according to the definition of the State of Israel as Jewish before democratic.

Netanyahu requested to complete a first reading before the Knesset adjourns for the summer. However, Eyal Yanon, the Knesset's legal advisor, informed Knesset Speaker Yuli Edelstein that a proposal such as this cannot be advanced on such a short schedule.

According to Yanon in a letter to Edelstein, "The proposed amendment to the Basic Law is the most significant constitutional act that the Knesset has undertaken since the enactment of Basic Laws in 1992. The proposal is asking to define the legislative character of the State of Israel and redesign the existing constitutional formula.

"It is clear that such a move requires a thorough, substantial and proper legislative process in which members of the Knesset will be given an opportunity to express their views and hear from public figures, experts and academics."