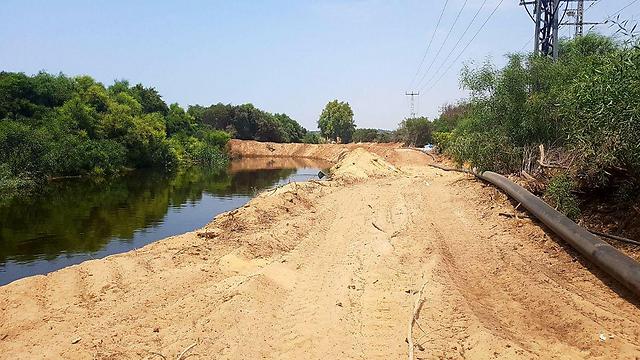 Due to reduction of electricity to Gaza, its sewage treatment facility has been shut down, causing overflow into Israel; to prevent an ecological disaster, Israel's Water Authority builds pipeline to absorb strip's wastewater.

After the sewage treatment facility in Gaza was shut down due to the electricity crisis, and waste water started polluting Israeli groundwater, Israel decided to once again have a pipeline connect it with Gaza—after 12 years of disengagement—and help alleviate its wastewater problem.

This week, the Israel Water Authority deployed a pipeline for the absorption of wastewater in the neighborhoods of northern Gaza, Beit Lahiya and Beit Hanoun. Israel invested NIS 40 million in the project.

The pipeline is supposed to transport the sewage from the Gaza Strip to the sewage treatment plant in Sderot and the settlements of the Shaar Hanegev Regional Council, located in the area of Kibbutz Erez.

Over the last two weeks, following the collapse of water purification facilities in Gaza and the inability to repair them due to the electricity crisis, Palestinians in the northern neighborhoods of the Gaza Strip—Beit Hanoun and Beit Lahia—began to drain sewage into Nahal Hanun, which crosses Israel and empties into the sea.

As a result of the flow of wastewater, the stream was flooded, creating a large environmental hazard, which began to pollute groundwater from the coastal aquifer, from which Mekorot, a national water company, pumps drinking water.

In the last few days, the Palestinians have increased the flow of the sewage, forcing Israel to construct a dam in Nahal Hanoun, east of Nativ HaAsara near the Gaza border. Initially, the Hof Ashkelon Regional Council had attempted to pump the sewage into trucks, but the amount of accumulated sewage rendered this option unfeasible.

The closing of ground water pumping stations is an extreme step and serves to highlight the extreme humanitarian crisis currently underway in the Gaza Strip and its direct impact on Israel.