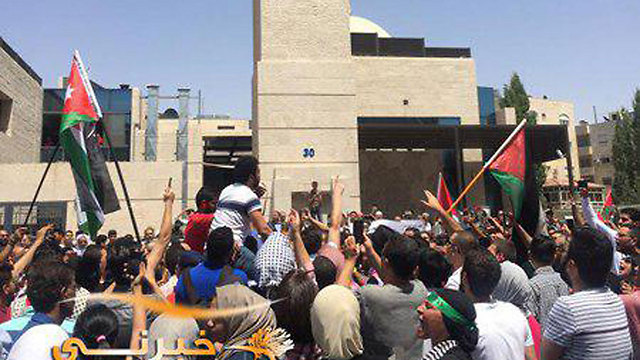 Anti-Israel protest breaks out in Jordan

In Jordan, demonstrators shout "Death to Israel" and demand to cancel the peace treaty in light of the incident at the Israeli Embassy; Jordanian security forces are trying to disperse the demonstration.

Not far from the Israeli embassy in Amman on Friday, a demonstration against Israel took place against the backdrop of the Temple Mount crisis and the shooting incident in which an Israeli security guard shot two Jordanians earlier this week.

The demonstration came from the Al-Kalawati Mosque, adjacent to the Israeli embassy in the Al-Rabiya area. The demonstrators shouted slogans against Israel and the peace treaty: "There is no embassy to the (Zionist) entity on your land, Amman, death to Israel and may Israel fall."

A reporter for the Turkish news agency Anadolu reported that the Jordanian security forces were trying to disperse the demonstration near the Israeli embassy and were working to keep the participants away.

Another demonstration came from the Palestinian refugee camp al-Wahda in Amman for the Al-Aqsa Mosque. According to the Jordanian media, the demonstrators demanded the expulsion of Israeli Ambassador Einat Shlain from Amman and protested against the authorities' decision to return the Israeli security guard from the incident at the Israeli Embassy.

Anti-Israel protest in Jordan near the Israeli Embassy

King Abdullah of Jordan paid a visit of condolence the family of the second victim of the incident at the embassy, Bashar Hamarneh, the owner of the apartment who was in the area and was caught in the incident.

King Abdullah pays a visit of condolence the family of Bashar Hamarneh
Yesterday, King Abdullah visited the mourning tent of the Jordanian stabber, Zakaria al-Jawawdeh, and told his father: "Your son is my son; we will not give up on his rights."

Jordanian Attorney General Akram Masaadeh told the official Petra news agency that the Jordanian prosecution had completed its investigation into the incident at the Israeli Embassy in Jordan on Sunday.

According to Masaadeh, "the prosecution attributed a murderer called 'Ziv' to the charge of killing more than one person and holding firearms without a permit." The prosecutor added that an investigation found that the Israeli security guard enjoys diplomatic and legal immunity: "The immunity he enjoys in accordance with the Vienna Convention is only procedural immunity that does not exempt him from trials before international courts."

"The Israeli prime minister must show responsibility and take measures that include putting the murderer on trial, instead of treating the crime as a political demonstration," Abdullah said during a meeting of the National Policy Council. Not only in Jordan did people demonstrate against Israel. Dozens of people protested on the streets of Tehran, Iran in an anti-Israeli demonstration and chanted slogans often heard in the capital of the Islamic Republic, such as "Death to Israel" and "Death to America."