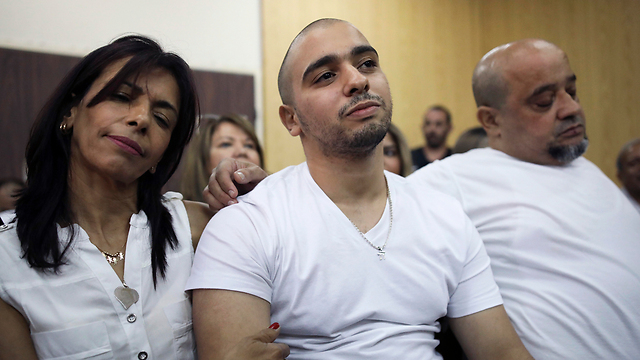 It’s time to bid farewell to the Elor Azaria affair

Op-ed: The lessons from the Hebron shooting incident cannot end in the IDF. The entire political system—the entire Israeli society, in fact—must draw conclusions. If we fail to maintain the norms of a law-abiding state, we will undermine the foundations this country is built on.

Elor Azaria made his choice when he approached a wounded terrorist, 11 minutes after he was neutralized, and shot him to death, and when he lied about it later on; his parents made their choice when they put their son’s defense in the hands of a spiteful, lawless gang, which tried to promote itself at their expense.

Elor isn’t a child and his parents aren’t children. They must understand people pay a price for the choices they make in life.

The external noises that accompanied Azaria’s trial exposed dangerous trends in Israeli society. It turns out that among many Israelis, hatred towards others exceeds everything—facts, laws, norms and military ethics, common sense and national responsibility. Anyone browsing through social media gets the impression we have turned into a nation of vigilantes, volunteer hangmen, executioners, who have waged a war of life and death led by the chief of staff, attorney Yoram Sheftel.

Elor Azaria and his parents in court, Sunday. They must understand that people pay a price for the choices they make in life (Photo: AP)
In other words, forget the stories about the hi-tech nation. The ambition of our life right now is to integrate into the region.

When social networks talk, politicians obey—at least some of them. Even before the judges finished reading their ruling, Prime Minister Benjamin Netanyahu, Defense Minister Avigdor Lieberman and Education Minister Naftali Bennett spoke up in favor of amnesty. So many rules of the game have been broken here recently, that their intervention in a judicial proceeding before it has ended doesn’t make much of a difference.

Make no mistake about it: Elor Azaria’s fate has never been on their mind. Their calls and their colleagues’ calls for an immediate pardon for the soldier only disrupt the legal process and make it difficult for IDF Chief of Staff Gadi Eisenkot to make a decision, if and when he is required to do so. They are doing what they’re doing because they think it’s what the people expect them to do. To be more exact, it’s what the voters they’re competing for expect them to do.

It’s not a good thing when so many Israelis embrace a soldier who has failed; but when a prime minister, a defense minister and an education minister follow in their footsteps, it becomes dangerous. This isn’t education, this isn’t security and this isn’t leadership either.

During the trial, I thought admitting responsibility and a mitigation of the sentence would be the right way to end this painful saga. Azaria did what he did in the middle of a wave of terror attacks that left its mark on every home in Israel. Ministers and Knesset members had called for the killing of terrorists, even terrorists who had been neutralized and were helpless. The battle waged around the trial turned Azaria into a symbol, a banner. Each side in the argument used the shooting soldier for its own purposes. His shoulders, I thought, are too narrow to carry all this baggage.

The facts in this affair are simple; the evidence is clear. It’s a waste of time.

Yoram Sheftel, Azaria's lawyer (Photo: Tomer Applebaum)
But Azaria refused to take the blame. His defense in the district military court was unfounded, sometimes even ludicrous; his defense at the appeal court was even worse. He and his family chose to seek shelter under the wings of former Knesset Member Sharon Gal and attorney Sheftel. With these two, the only place where Azaria could have been acquitted is the La Familia court. On Sunday, after the verdict was handed down, Sheftel said he was willing to negotiate with the IDF for a pardon. The IDF would present its conditions, and he and his client would consider them solemnly. This statement properly illustrated why the family was wrong to hire Sheftel. The IDF and Azaria are not negotiating as equals. Azaria was convicted of manslaughter. His chances of reaching the Supreme Court are slim, and he has zero chances of winning there. His choice is clear: He can either go to jail for a year (if one-third of his sentence is reduced) or take responsibility for his actions and ask the chief of staff to mitigate his sentence. There will be no amnesty. I’m not sure what the right decision is, as far as Azaria is concerned. The difference is basically between half a year to a year. If he doesn’t apply for amnesty, he will spend a year in jail but will remain a hero in the eyes of a certain part of the Right; if he does apply, he will spend half a year in jail but lose his fame. It’s a dilemma. As far as the chief of staff is concerned, the important thing is that Azaria goes to jail. The statement he released Sunday evening encompasses his view: First prison, then taking responsibility, and then a mitigation of the sentence. The chief of staff has promised to draw conclusions from the way the IDF handled the affair, including the way he handled it. The truth is the lessons cannot end in the IDF: The entire political system—the entire Israeli society, in fact—must draw conclusions. If we fail to maintain the norms of a law-abiding state, if we fail to get over gut feelings and social media tweets, we will undermine the foundations this country is built on. It’s time to bid farewell to the Azaria affair.