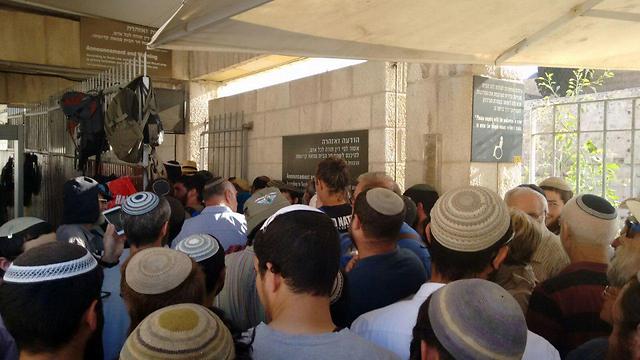 As new daily record for Jewish visitation is set, Jordan's foreign minister decries the number of 'extremists taking over Al-Aqsa' and threatens new crisis; nine Jewish visitors removed from site after breaking rules; 3 Jews, 1 Muslim arrested for assaulting police officers who tried to break a fight between them.

Over 1,000 Jews visited the Temple Mount in Jerusalem on Tuesday to mark the fast of Tisha B'Av, a day of mourning over the destruction of the two holy Temples.

According to an umbrella group of Temple organizations, a new daily record was set with 1,263 Jews visiting the holy site on Tuesday. This is the first time since the 1967 Six-Day War the number of Jewish visitors has surpassed 1,000. Thousands more were at the Western Wall, sitting on the floor as a sign of mourning.

During the day, nine Jewish visitors were removed from the Temple Mount for violating the rules at the site. Four people—three Jews and one Muslim—were arrested for assaulting police officers who tried to break a fight between them.

Throughout the morning, hundreds of people stood in line adjacent to the Mughrabi Gate, the only entrance to the Temple Mount for non-Muslims, to visit the site. Entering the ramp leading to the Mount, Jewish visitors passed through metal detectors and thorough security checks to ensure no forbidden items, including prayer books, religious items and Israeli flags, made it up to the Mount. On the ramp leading up to the gate, officers briefed visitors on visitation rules, including prohibitions on praying and bowing down.

Jewish visitors were also required to leave identification at the checkpoint.

Israel's Sephardic Chief Rabbi, Yitzhak Yosef, who opposes the visit of Jews to the Temple Mount, said the visitors were "desecrating the site's holiness. Particularly today, on Tisha B'AV, the day the Temple was destroyed, it is my obligation to once again mention visiting the Temple Mount is forbidden according to Halacha."

The site has been at the center of recent tensions after Israel installed, and then removed, metal detectors there following the deadly shooting of two Israeli policemen. Muslims administer the compound, home to the Al Aqsa Mosque and Dome of the Rock, while Jews can visit but not pray there.

Muslims refer to the site as the Noble Sanctuary, while Jews call it the Temple Mount. It is considered the holiest place in Judaism and the third holiest in Islam.

Less than a week after the end of the standoff at the Temple Mount, Jordan's Foreign Minister Ayman A-Safadi threatened Israel with another crisis.

"The numbers of extremists taking over Al-Aqsa is at an all-time high, not seen since that start of Israeli occupation in 1967," he said at an Organization of Islamic Cooperation conference of foreign ministers in Turkey.

"The crisis is over, but many more and far more dangerous crises will erupt as a result of continued Israeli violations," A-Safadi warned. "This will happen should Israel fail to uproot the sources of contention, the occupation remains in place and east Jerusalem fails to become the independent capital of a sovereign Palestine within the 1967 borders."

Jewish visitors at the Temple Mount (Photo: Yeraeh organization)
A-Safadi charged that "Israel tried to change the historic and legal status quo in the Al-Aqsa Mosque on the pretext of security. But that security is achieved by perpetuating everything that deprives the Palestinian people of their rights and perpetuating an environment of despair that is being exploited by extremism and violence."

Also speaking at the same conference was Palestinian foreign minister Riad Malki, who denounced the "annual massive assault against Al Aqsa on the occasion of the anniversary of the so-called destruction of the Temple."

"Netanyahu will try again to impose his status quo and we must prepare for the next round, which could happen very soon and be very tough," Malki said.

The lifting of Israeli measures "is a small victory in a long battle for freedom," he added.

Turkish Foreign Minister Mevlut Cavusoglu, whose country is the current president of the OIC, called on Muslim countries to support the Palestinians "with deeds and not words."

"We must act to protect the Al-Aqsa Mosque and Palestine," he added, reiterating the appeal launched a few days ago by Turkish President Recep Tayyip Erdogan to all Muslims to visit Jerusalem.

TPS , AFP and The Associated Press contributed to this report.