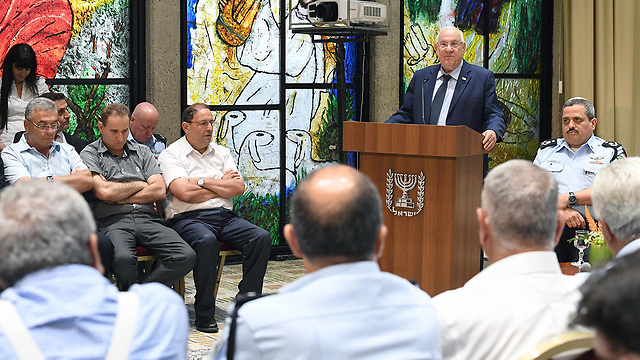 As president convenes meeting with Arab sector leaders in bid to increase cooperative efforts to police crime, police chief and Rivlin express disappointment after just 20 out of 46 Arab leaders bother to show up; 'It is a shame, because we are destined to live together.'

Efforts to vamp up cooperative activities between authorities of the Arab sector and the Israel Police were dealt a humiliating blow Wednesday after just 20 Arab leaders out of a total 46 Arab mayors and local authority heads bothered to show up to a meeting with President Reuven Rivlin and Police Commissioner Roni Alsheikh. The meeting, which was convened at the President’s Residence, was opened with remarks delivered by President Rivlin, who expressed his regret and disappointment at the weak turnout of the Arab leaders.

“This meeting was planned at the request of many citizens of the State of Israel, to discuss the State's responsibility for the welfare of every citizen,” Rivlin began.

“We asked to meet with those responsible for public safety in order to discuss and consider their abilities, and the need for cooperation. I am very sorry that many of the council heads who wished to arrive did not come due to various pressures. It is a shame, because we are destined to live together and we have to find a way to promote this understanding inside all of us.”

At times such as these, when extremist forces are raising their heads, Rivlin continued, “we are reminded how easy it is to destroy, and to enflame the situation on the ground. At such moments we do not have the privilege to be entrenched out of a sense of the justness of this side or the other, we must be wise. We must join hands. We must demonstrate what leadership means.

Photo: Mark Neiman/GPO
“We are meeting during tense times between Arabs and Jews in this country, and in these days of tension and crisis, leadership is put to the test. I must say that after the murderous attack on the Temple Mount, in which Israeli citizens murdered two policemen and hurt all of us, Arabs, Druze and Jews alike, I expected a clear and sharp condemnation from the leaders of the Arab community in Israel. There were just a few who made a clear and outright condemnation, and unfortunately, I was disappointed.”

Photo: Mark Neiman/GPO
Rivlin also added that regardless of whether Arabs or Jews preferred not to live among one another, the best of the situation must be made. "Our shared lives here, Jews and Arabs—this is not a question, it is a fact. Whether we want it or not, whether we will live in peace or in conflict, we will live here together. Recognition of this basic fact should guide our actions and our choices, always, Jews and Arabs alike, even in difficult moments,” he told his listeners. Turning his attention to the violent outbreaks that had marred the Old City and the Temple Mount over the past few weeks, Rivlin highlighted the fact that it had ultimately taken Israeli leadership and Arab leadership to cooperate to abate the tensions that threatened to continue indefinitely.

Police Chief Roni Alsheikh (Photo: Mark Neiman/GPO)
Speaking after Rivlin, Alsheikh also made clear his disappointment in the low turnout among the Arab leaders but insisted that the cup was half full. “I am optimistic, even if there are those who chose to panic. You cannot have a normal life without policing—we all need policing. That's why I'm optimistic and I'm sure we'll bring results,” he said. The interest, he concluded, was for every Jewish and Arab resident. Chairman of the Arab Regional Council Heads, Mazen Ganim thanked President Rivlin for the initiative.“I would like to thank you for all your endeavors. You prove that this house belongs to all of us, Jews and Arabs,” he opened with his remarks, echoing those of the Israeli leaders.

Alsheikh, Rivlin and Mazen Ganim (Photo: Mark Neiman/GPO)
Ganim also thanked Alsheikh for promoting the meeting and his cooperation. “The Arab community was not born a violent society. The circumstances brought us to this. The Israeli Police proved that it can weed out all the crime families, and I want to say that all the crime families in Jewish communities have flocked to Arab communities.” Pointing to statistics, Ganim said: “Since 2000, 1,200 Arab residents have been killed with illegal weapons,” and stressed, “Dear friends, fellow council heads, there is a responsibility on everyone, there are undoubtedly many obstacles and you can help us overcome the obstacles through employment and the economy.”