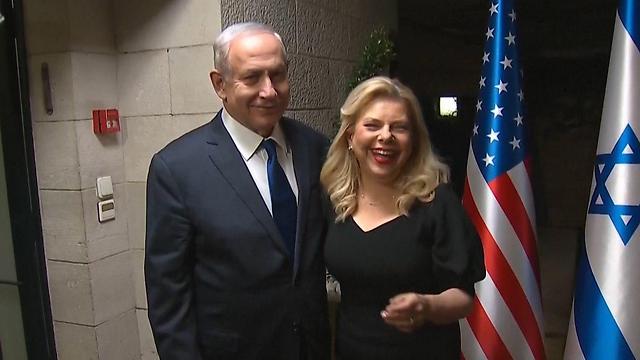 Attorney General Avichai Mandelblit is expected to inform the wife of Prime Minister Benjamin Netanyahu, Sara Netanyahu, that he has decided to prosecute her, and that she will be subject to a hearing on the suspicion of misusing state funds under aggravated circumstances.

Mandelblit is expected to announce his decision soon, following the completion of a police investigation into Mrs. Netanyahu's alleged misuse state funds, which reinforced the original recommendation of the Jerusalem District Attorney and the State Prosecutor to indict her.

Immediately after Passover, the District Attorney, which is expected to handle the case, recommended that the police's position to have Mrs. Netanyahu indicted be adopted.

Sara Netanyahu (Photo: AP)
In a previous statement, the police said that there was an evidentiary basis for the prosecution of Mrs. Netanyahu and three of her assistants. At the center of the affair is the suspicion that Sara Netanyahu funded her private expenses with state money.

Photo: Kobi Gideon
Specifically, the police's suspicions involve Mrs. Netanyahu using said funds to pay for her late father's caregiver, as well as for high-priced meals, employing electrician Eli Fahima for private jobs and inflating and the cost of patio furniture for the Netanyahus' private house in Caesarea, also at the expense of the state.

Attorney Yossi Cohen, who represents the Netanyahu family, said that "if the reports (of an indictment—ed) are true, they are absurd accusations. How far will the persecution of the Netanyahu family go? To the cup of tea the housemaid served Mrs. Netanyahu's 97-year-old father, who lived in her home while on his deathbed? "

The Ministry of Justice stated, "We wish to clarify that at this stage, the Attorney General's decision has yet to be made. When such a decision will be made, in addition to the added investigations as per the attorney general's requests, a public announcement will be made."