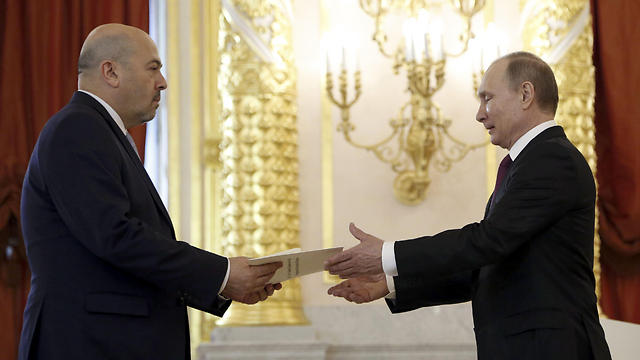 Israel's ambassador to Moscow summoned by Russian Foreign Ministry after Warsaw decided to exclude Moscow from project to build museum and memorial site for the victims of the Nazi extermination camp; Russia expects Israel to intervene in its favor.

The Russian Foreign Ministry summoned Israel's Ambassador to Moscow Gary Koren over the weekend to provide clarifications after Poland decided to exclude Russia from a commemoration project for the victims of the Nazi extermination camp in Sobibór.

Such a harsh statement would likely not have been made without the approval of Russian President Vladimir Putin.

Israel's ambassador to Moscow Gary Koren and Vladimir Putin (Photo: Reuters)
Israel hastened to make it clear it did not object to the inclusion of Russia in the project, but that did little to placate the Russians, who expect Israel to make it clear to the Poles the project cannot continue without Russia.

The Nazi extermination camp in Sobibór, Poland operated between May 1942 and October 1943, when an estimated 150,000-250,000 Jews were murdered in its gas chambers. The camp was closed after a revolt led by Alexander Pechersky, a Russian Jew who served as an officer in the Red Army.

A new museum and memorial site are set to open at the Sobibór extermination camp in 2019. An international steering committee was established to lead the project, headed by Poland, Israel, the Netherlands and Slovakia.

Russia was invited to join the committee in 2013, and the Russians even expressed willingness to make a significant financial contribution to the project because of the historical importance they attach to the liberation of Sobibór.

However, talks between Poland and Russia have borne no fruit, and Warsaw announced last month that Moscow would not be involved in the project, which angered the Russians. Most of that anger was directed at Israel, which the Russians believe enabled the Poles to exclude Moscow from the project.

The site of the Sobibor extermination camp (Photo: Yoram Haimi/IAA)
In addition to the Israeli ambassador, Russia summoned a number of other foreign ambassadors for either clarification or reprimand, including the ambassadors of the Netherlands and Slovakia. Alex Tenzer, a Russian media expert, believes the crisis is linked to the deterioration of relations between Russia and Poland, which reached a low point after the Polish president's plane crashed in Russia in 2010, killing all on board including the president and his wife, and the break out of the war in Ukraine. "The Russians are furious at Israel for this and think Israel can influence Poland because all of those who were murdered in Sobibór were Jews," said Tenzer. "As far as Russia is concerned, Israel had the power to tell Poland: 'Russia must be a partner in this project.'"

According to Tenzer, the leader of the Sobibór revolt, Alexander Pechersky, who died in 1990, is considered a national hero in Russia. In 2016, President Putin even posthumously awarded Pechersky the Russian Order of Courage medal.

"In Israel, everyone knows about the failed Warsaw Ghetto Uprising, but few people know about the only uprising that succeeded in an extermination camp," said Tenzer. "It is time they learn about Pechersky in Israel as much as about the heroes of the Warsaw ghetto."

Israel's Foreign Ministry spokesman Emmanuel Nahshon clarified that "The relevant parties in Israel, including the Ministry of Foreign Affairs and Yad Vashem, are not opposed to the inclusion of Russia in the international committee."