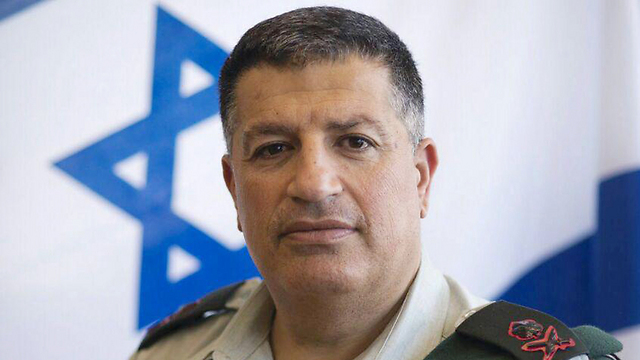 In addition to the ongoing security monitoring by the IDF of what is happening in the Palestinian territories, Coordinator of Government Activities in Territories conducts psychological warfare against Hamas leadership in Gaza—using a Facebook page to publish embarrassing details about senior Hamas officials, and in particular about its head, Yahya Sinwar.

Facebook has served as a platform for digital warfare between Israel and Hamas for years, but that has recently taken an interesting turn.

About two years ago, the Coordinator of Government Activities in the Territories (COGAT), Major General Yoav Mordechai opened an Arabic-language Facebook page called al-Munnaseq (the coordinator), which serves as a method to bypass the Palestinian leadership and communicate directly with the Palestinian population.

Major General Yoav Mordechai (Photo: IDF)
In the past, the page has accumulated an impressive number of 200,000 followers, most of them Palestinians from the Gaza Strip and the West Bank, as well as from various Arab countries.

The page officially provides information in Arabic for the Palestinian population, but it is also used for propaganda, shaming and psychological warfare, especially against the de facto Hamas administration in the Gaza Strip, but also with the Palestinian Authority.

The Facebook page includes stories that embarrass the leadership in Gaza which originate within Israel's intelligence community.

These are stories that Hamas does not approve the publication of and are silenced, as they might embarrass its leaders or harm the tactical ties that the Gaza leadership is conducting with neighboring Arab countries, such as Egypt. Recently, for example, two stories have been published on the page, which show Hamas leader Yahya Sinwar in a bad light.

Hamas leader Yahya sinwar (Photo: AP)
One of them deals with his nephew Ahmed Sinwar, a married man and father, who was caught commiting adultery with a married woman who herself has children. The nephew took advantage of his contacts in Gaza, and with the help of his uncle the matter was put to rest.

When the information reached Israel through its intelligence channels, the defense establishment decided to use the coordinator's page and publicize the matter in order to inform the Gaza public and embarrass Sinwar.

The story was published in Arabic and the page stated: "The punishment in the Hamas terrorist organization for adultery is stoning to death, but will Ahmed Sinwar be stoned? Probably not, and the reason is that if you are close to the Hamas leadership, the usual legal system does not apply to you. Know, dear citizen of Gaza, that you can do whatever you want, especially if your uncle is Yahya Sinwar." Another one of Sinwar's nephews was entangled in a financial corruption affair that was also silenced, but in Israel they again decided to shame the nephew and his family for the sake of informing the Gazan public about the separate legal systems for close associates of Hamas and the common people of Gaza. The page stated that "everyone else would have been sent to prison for a long time, but not the family and associates of the tyrant Yahya who do whatever they like and enjoy nepotism and special privileges. Meanwhile, the residents of Gaza are forced to set themselves on fire or to live on the street in poverty, while the corrupt Sinwar family enjoys the benefits of power."

At the same time, COGAT and other elements in the defense establishment have been working in recent years to close Facebook pages that incite and support terrorism.

Recently, for example, the Facebook page of the Shuafat refugee camp has been shut down. The admins of the al-Munnaseq page published a post, taking pride in the closure and saying they were responsible for it. This caused a storm on the Internet to the extent that even Al-Jazeera, the largest Arab news channel in the world, referred to this in a special article that criticized the connection between Israel and Facebook.

Hamas occasionally tries to fight the phenomenon, and the organization's security forces in Gaza instruct the public not to enter the page and to ignore its publications, but without much success.