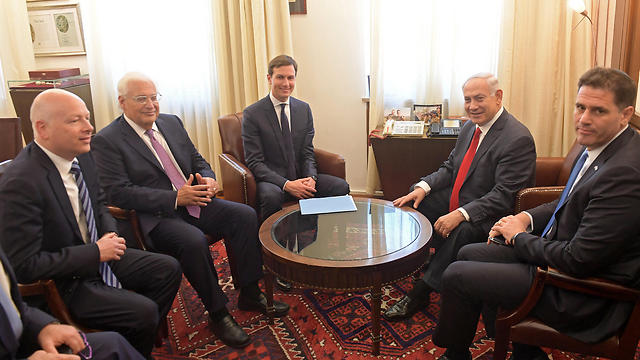 White House source tells Politico ahead of arrival of Kushner and Greenblatt visit will 'focus on the path to substantive Israeli-Palestinian peace talks, combating extremism, the situation in Gaza,' adding the president believes resolution of recent Temple Mount crisis 'has created an opportunity to continue discussions and the pursuit of peace.'

US President Donald Trump's delegation to the Middle East arrived in Israel on Wednesday night and is expected to also travel to Ramallah to meet with Palestinian President Mahmoud Abbas.

The delegation is comprised of Trump's son-in-law and senior advisor Jared Kushner, Middle East envoy Jason Greenblatt and Deputy National Security Advisor for Strategy Dina Powell. The visit's goal, a White House source told Politico, is to "focus on the path to substantive Israeli-Palestinian peace talks, combating extremism, the situation in Gaza, including how to ease the humanitarian crisis there."

Greenblatt, Friedman and Kushner meet with Netanyahu (File photo: Amos Ben-Gershom, GPO)
Trump, the source added, "believes that the restoration of calm and the stabilized situation in Jerusalem after the recent crisis on the Temple Mount/Haram al-Sharif has created an opportunity to continue discussions and the pursuit of peace."

Before coming to Israel, the American met with leaders from the United Arab Emirates, Jordan, Qatar and Saudi Arabia. On Wednesday, they sat down with Egyptian President Abdel Fattah al-Sisi. This marks Kushner's third visit to the Middle East since assuming his role as Trump's advisor.

After eight months of Greenblatt taking on the lion's share of responsibilities, he met with National Security Advisor H.R. McMaster last month to discuss giving the National Security Council a bigger role in the effort to revive Middle East peace talks, Politico reported.

In an interview with Politico, Coates said that despite being "criticized all the time for not being a career diplomat," Greenblatt was able to successfully help prevent the escalation of an already tense situation following the Temple Mount attack and the metal detector crisis. "I don’t know if a career diplomat could have handled that situation as ably as he did. We are no longer in a crisis mode," she said.

In addition, Deputy National Security Advisor for Strategy Dina Powell, who was born in Egypt and is fluent in Arabic, joined Kushner and Greenblatt on their current trip to the region.

The American delegation arrived in the Middle East amid harsh disappointment on the Palestinian side with the Trump administration's approach. Ramallah is furious with the White House's attempts at corralling both sides back to the negotiations table without meeting Palestinian demands first—declaring the starting point for the talks to be the two-state solution based on the 1967 borders and freezing Israeli construction in West Bank settlements during the negotiations.

The Palestinians also want a specific and clearly delineated timeframe for reaching an agreement to prevent holding negotiations purely for the sake of negotiating. "The remaining question revolves around the American willingness to make the ultimate deal, as President Trump called it," said Fatah chief Nabil Shaath Wednesday.

In private conversations, however, Palestinian leadership sounds less optimistic, severely criticizing the Americans and their ability to serve as honest mediator between the two sides while acceding to Israeli demands by categorically refusing to publically support the two-state solution.

While the Palestinians expect to get some answers for these two issues in their coming meetings with the American representatives, their hopes of a breakthrough are slim to none.

The PA is also furious with Washington's objections to the sanctions Abbas wishes to place on Hamas in Gaza, which harm the entire Palestinian populace there. The fact Israeli-Palestinian security relations are near the low-water mark after Abbas's declaration security coordination will cease also hasn't improved the already muddy waters between the parties.

In fact, security relations between Israel and the Palestinians today are limited to talks with Hussein al-Sheikh—the PA's man for security coordination with Israel—and with the commander of military liaisons for the Palestinian security organizations. All other ties have been suspended for more than a month.

In light of these frustrations, the Palestinian leadership has started dropping vague hints it is considering returning to unilateral moves such as attempting to accede to full UN membership, a return to filing suits with the International Criminal Court in The Hague and even threatening—not for the first time—to dismantle the Palestinian Authority and move its powers to the Palestinian Liberation Organization.

While these threats are neither new nor have they ever been realized, they are now coming up after a period in which the Palestinians have suspended their operations on the international diplomatic stage in favor of giving the Trump administration the chance to jumpstart serious talks with the Israelis.

Prime Minister Benjamin Netanyahu is due to meet with the top American officials on Thursday, just a day after his short visit to Sochi, where he cautioned Russian President Vladimir Putin that Israel intends to prevent Iran from further cementing its hold over Syria.