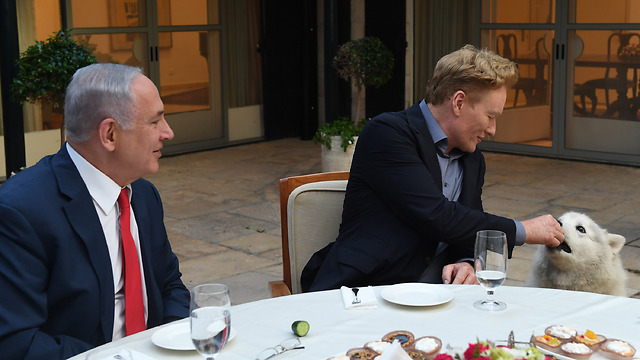 Late-night talk show host Conan O'Brien meets with Prime Minister Benjamin Netanyahu and his wife Sara for dinner, and feeds their dog Kaia—and more impressively, avoids getting bitten by her.

During their meeting, O'Brian fed the Netanyahus' pet dog Kaya, who in the past had bitten several guests.

During his visit in recent days, O'Brian complimented Israel on social media.

O'Brian, who is currently in Israel for the filming of a documentary special for his program, uploaded videos to social media from the flight to Israel and his impressions from Tel Aviv, including a culinary recommendation: "You must try Shakshuka and Goldstar."

Prime Minister Netanyahu referred to O'Brian's visit in a video of his own.

In the video, which was published in his Instagram account and filmed in his office, Netanyahu called O'Brian "the pale, who melts in the sun" and told his aides "Get back to me when Colbert is here" before switching to a more serious tone, saying: "Seriously Conan, we are excited to have you."