The threat made against Malkin 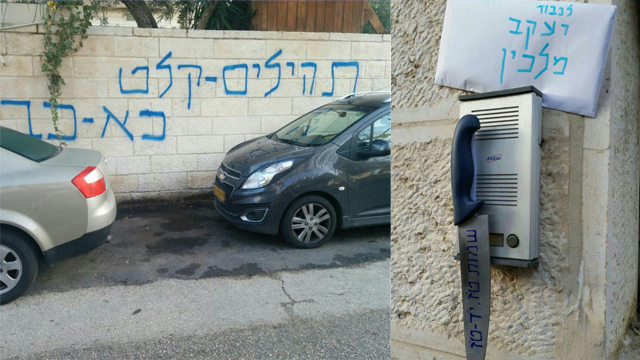 A resident of Bnei Brak is accused of buying gasoline in order to set fire to the offices of the Breaking the Silence organization, threatening heads of atheist organizations, sending threatening letters to the Reform community and spraying graffiti on their homes.

An indictment was filed in the Jerusalem District Court against a 39-year-old resident of Bnei Brak for extortion, threats, vandalism, and intent to commit arson.

According to the indictment, the defendant used to send threatening letters to leading figures in the Reform community, including Professor Yaakov Malkin, a lecturer on secular and atheistic Judaism, Anat Hoffman, chairwoman of Women of the Wall and director of the Reform Center for Religion and State, director of the Israeli Atheists Association.

The threat made against Malkin (Photo: Israel Police)
Among other things, he sprayed threatening graffiti on a Reform synagogue in Ra'anana and planned to harm Breaking the Silence activists.

The indictment lists six different charges of events that took place from 2014 and until the defendant's arrest.

Among his other victims were Rick Jacobs, president of the Union for Reform Judaism in North America, and Gilad Kariv, a Reform rabbi and executive director of the Movement for Progressive Judaism.

The Defendant used the Agron software, which was leaked several years ago and contained data from the Population Registry of the State of Israel, in order to collect details about his victims. In some cases, the defendant also distributed threatening letters to the neighbors of the victims.

The first charge describes how in May 2014 the defendant repeatedly threatened the life of Dr. Dan Boneh, an anthropologist and the author of the book "Never Happened" which represents a firm approach against the religious outlook, sent him a letter demanding that he stop all his "heretical-apostolic" activity in which he takes part: "Books, conferences, lectures, articles, etc., membership in organizations, and anything else related to the transmission of atheism in which you participate."

He also demanded that he repent and renounce his ungodly ways. A few months later, the defendant sprayed the door of the Boneh's house with a Star of David and wrote the biblical inscriptions on the building's inner walls.

Later, in October 2014, he called him from a pay phone to ask him if he planned to attend a conference by the Israeli Atheists Association and asked the complainant if he had repented and bettered his ungodly ways.

The complainant replied to the defendant that his letter made him very nervous and that he was no longer active as an atheist activist, and asked for the defendant's mercy. Following the threats, Boneh stopped his activity and canceled lectures and conferences in which he was supposed to participate, dealing with his book or with atheism. The complainant then moved to another apartment and changed his phone number.

Envelopes and a knife placed by the defendant in the Reform synagogue in Ra'anana (Courtesy of the Reform movement)
One of the cases published in the media is the spraying of graffiti on the home of professor Malkin. In addition, the defendant attached a knife to the door and an envelope bearing the biblical inscriptions that spoke about the Amalekite genocide, alleging that Malkin is a heathen and should be smited.

The last charge describes how in August 2017 the defendant collected information about 42 activists of the Breaking the Silence organization and purchased gasoline in order to set fire to the building in which the organization's offices are located.

"I do not know who the man is, but because mine is not the only case against him then it's good that they caught him," Professor Malkin commented on the indictment. "This is a success of the legal authorities and the importance of this is in the expression of intolerance towards non-religious and secular people.

"The reason I was attacked was my activity in secular Jewish culture. He chose to attack me because I lecture at a seminary with secular rabbis. Any criticism is justified, but not when it becomes violence."

Answering on whether he still fears for his safety, Malkin noted: "How can you not be afraid in this country? You do not know where there is a terrorist, whether he is Arab or a Jew. There is concern, but we repress it—otherwise you cannot live in this country."