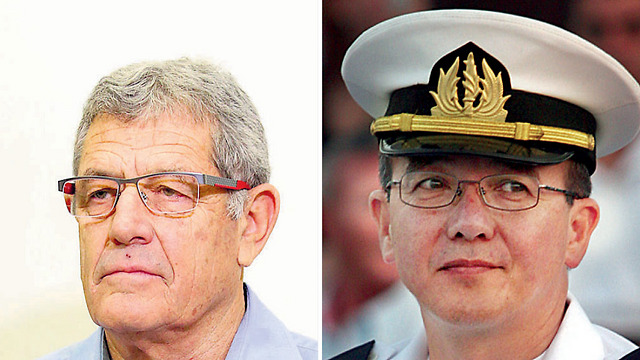 Miki Ganor, state witness on the submarine affair, was brought into the interrogation room last week to confront former navy commander Eliezer (Chiney) Marom, also implicated in the affair, to exhort him to reveal all information about their mutual dealings.

With the outbreak of a second wave of arrests of people related to the affair, also known as Case 3000 involving the scandal-ridden purchasing of Israeli vessels from German submarine company ThyssenKrupp, Marom was questioned under caution at the offices of the police's Lahav 433 unit.

State witness Miki Ganor (L) and former navy commander Eliezer "Chiney" Marom
Marom is believed to have received hundreds of thousands of shekels in bribe money from Ganor, who is suspected of acting on behalf of the German company during the deal. "I received the money for consultation I provided for Ganor," he claimed during his questioning.  Taking Marom by surprise, investigators then brought Ganor into the room who told him directly that the money had not been intended for any consultations, but for carrying out the deal. "I gave you money for your help in the submarine project," Ganor told Marom. Sticking to his version of events however, Marom denied the claim. "That's not true," former Vice Admiral Marom retorted. "The money was for consultation." "I told them everything," Ganor then exclaimed. "Tell them the truth." The confrontation came following a Friday head-to-head between Ganor and strategic advisor Tzachi Lieber in which the former also urged the media strategic advisor to fully cooperate with investigators.

Ganor's testimony incriminated Lieber in the case, accusing him of acting as a middle man in the transfer of cash intended as a brive. While being investigated last week, Lieber indeed confirmed acting as the mediator between Ganor and David Sharan, Prime Minister Benjamin Netanyahu's former bureau chief.

Ganor's testimony purports an agreement with Sharan regarding bribe money provided to the latter through Lieber as an intermediary. Ganor initially transferred NIS 28,000 using this method, later moving NIS 50,000 more.

"I was only doing a friend a favor," Lieber claimed during his investigation.

Strategic advisor Tzachi Lieber, also implicated in the affair
After providing the testimony assisting police in untangling the complexities of the case, Lieber's hopes of being released were dashed Thursday when the courts extended his remand by five days.  Following the court's decision, Lieber opted to remain silent and no longer cooperate with the investigative team. "He realized he'd made a mistake by giving the police free gifts and so decided to clam up," said a source close to the investigation. In an attempt to extract further information from Lieber, police brought in Ganor. "Tzachi, I told them everything about us," Ganor told Lieber. "They're not trying to get us, only others." While Lieber remained uncooperative, Ganor continued efforts to get his former friend to open up. "I revealed everything that happened between us. I don't have the defense that you do," he continued.

Simultaneously, following police consideration of a possible state witness agreement to also be signed with Lieber, the latter's attorneys Yair Regev and Yafa Golan quickly arrived to the Lahav 433 offices, spoke with their client for two hours and advised him to remain silent.

Police are expected to carry out a third wave of arrests related to the affair in the coming days. Ganor provided them with new information, according to which there were some irregularities in managing Minister Yuval Steinitz's primary campaign.

This information may yet implicate more people close to the minister. As a result, Lahav 433 personnel held meetings this past weekend in anticipation of calling Steinitz himself in to testify.

A businessman very close to Steinitz was indeed questioned under caution Sunday on his part in the submarine affair.

The man, also known to be a political wheeler-dealer, was brought in for questioning following Ganor's testimony.