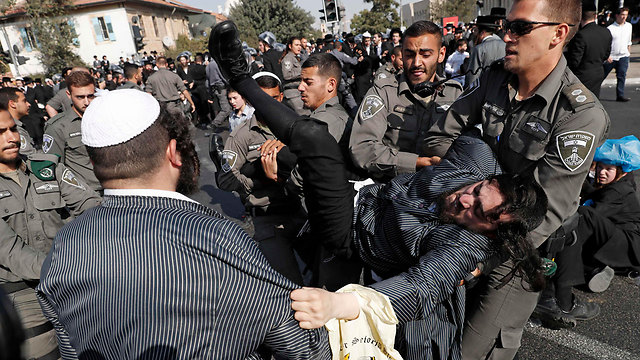 During the protests held in Jerusalem people began throwing rocks at the policemen and prevented the flow of traffic by laying down on the roads as they hurled abuse and insults at the officers.

In a clip caught on camera by one of the protesters, a policeman can be seen approaching one Haredi man and violently pushing him to the ground, prompting the crowds to scream 'murderer' and 'Hitler.'

Water was sprayed on the crowds as some policemen were photographed kicking and dragging the participants while others were seen placing some of the protesters in a headlock and at times stamping on them.

During the violent skirmishes, a 16 year old was evacuated to Hadassah Medical Center having sustained injuries to the head and suffered internal bleeding. He was said to be in moderate condition.

Another 17 year old was injured in the riots and was discharged from hospital after receiving medical treatment.

The police announced that they would review the conduct of the policemen during the protest.

"Anything suspected as exceeding authority or employing disproportionate force will be examined to the Police Investigations Unit."

Thousands of Haredim made their way to Jerusalem's Shabbat Square in order to protest the arrest of the grandson of the spiritual leader of Toldot Avraham Yitzchak Rabbi Shmuel Yaakov Kohn for draft dodging.

MK Moshe Gafni (United Torah Judaism) said that the defense minister had agreed to release the grandson to house arrest for Rosh Hashanah.

Photo: AFP
From Shabbat Square, the marchers made their way to the city’s conscription office.

Despite the protests beginning relatively peacefully, officers stationed at the scene were eventually instructed to disperse the protesters who refused to move away from the roads they were blocking.

The protest comes after the High Court of Justice (HCJ) made a majority ruling last Tuesday canceling an amendment ratified by the Knesset almost two years ago to the Conscription Law which lowered the annual quota on the number of Haredim required to draft into the IDF.