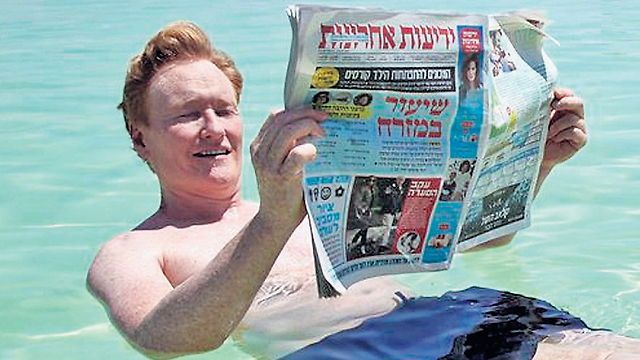 After traversing Israel for a week and snapping selfies with any sentient being along his route, the special containing late night host Conan O'Brien's visit to Israel aired in the United States on Tuesday.

Israel is not the first country visited by the funnyman, with previous stops in Germany, Cuba, Korea and Mexico all contained in the odyssey titled "Conan Without Borders."

Conan O'Brien in the Dead Sea
O'Brien's agenda seems somewhat baffling. While he clearly focuses on locations charged with political meaning for his US viewership such as Korea and Mexico, he doesn't seem to have a political bone in his body.

O'Brien refused to pick sides throughout his globetrotting, which aggravated many people who expected him to speak out clearly on the issues inherent to the places he was visiting. He was more interested, it seemed, in allaying pains or divisions with comedy, at most adding a short disclaimer along the lines of "In fairness, there are some people who disagree."

His blasé attitude does have one exception: Donald Trump. The President of the United States did not get to bask in the conciliatory, merciful glow of O'Brien's worldview. While visiting Mexico, O'Brien walked around with a donation box emblazoned with "For the wall," whereas in Israel he outlined Trump's plan for Jerusalem, replete with casino, hotel and hummus fountain. When he encountered a graffiti'd depiction of Trump on the Palestinian side of the West Bank separation barrier, he quipped "He's kissing that guard tower like it's his fourth wife" and "He finally got his wall."

O'Brien's message is one of peace and his stated aim was meeting locals and connecting with them, something he admittedly does well. Beyond his comedic capabilities, however, these foreign trips have allowed him to express his humanity. He speaks to people as equals and couldn't be condescending if he tried.

Israelis will probably love this installment of the "Conan Without Borders" specials. It has it all: a visit to the Dead Sea, walking along the markets of the Old City of Jerusalem, comedic segments with national treasure Gal Gadot, the beautiful people of Rothschild Boulevard in Tel Aviv and altruism at Safed's Ziv Medical Center, where he volunteered with Syrian refugees. Conan also somehow found the time to convert to Judaism, have a bar mitzvah and try to create a Speedo-free beach.

The late night host visiting Syrian refugee in a Safed hospital (Photo: Ziv Medical Center)
In the end, what may have turned out to be a 40-minute infomercial for Israel was redeemed by his peerless comedy and charisma. Those who come into the special with a political ax to grind will likely be disappointed, but those who are only in it for laughs will find plenty to be had. The settings change, but the star at the heart of it all—O'Brien himself—remained. The Israel special, similarly to the other ones, was about a very funny man who happened to be visiting someplace, this time Israel. It's hard to complain, though, as it's always nice to find out just how nice the world—and Israel specifically—look through Conan O'Brien's eyes.