A terrorist shot and killed a Border Policeman and two civilian security guards and seriously wounded another Israeli near the settlement of Har Adar in the Jerusalem area on Tuesday morning. The terrorist was shot and killed by security forces.

Magen David Adom paramedics treated three fatally wounded members of the Israeli security forces in their twenties and thirties, but had to pronounce them dead at the scene.

The Border Policeman was identified as Staff Sergeant Solomon Gavriya, 20, from Be'er Yaakov. Gavriya joined the Border Police 18 months ago. He is survived by his parents and three siblings. 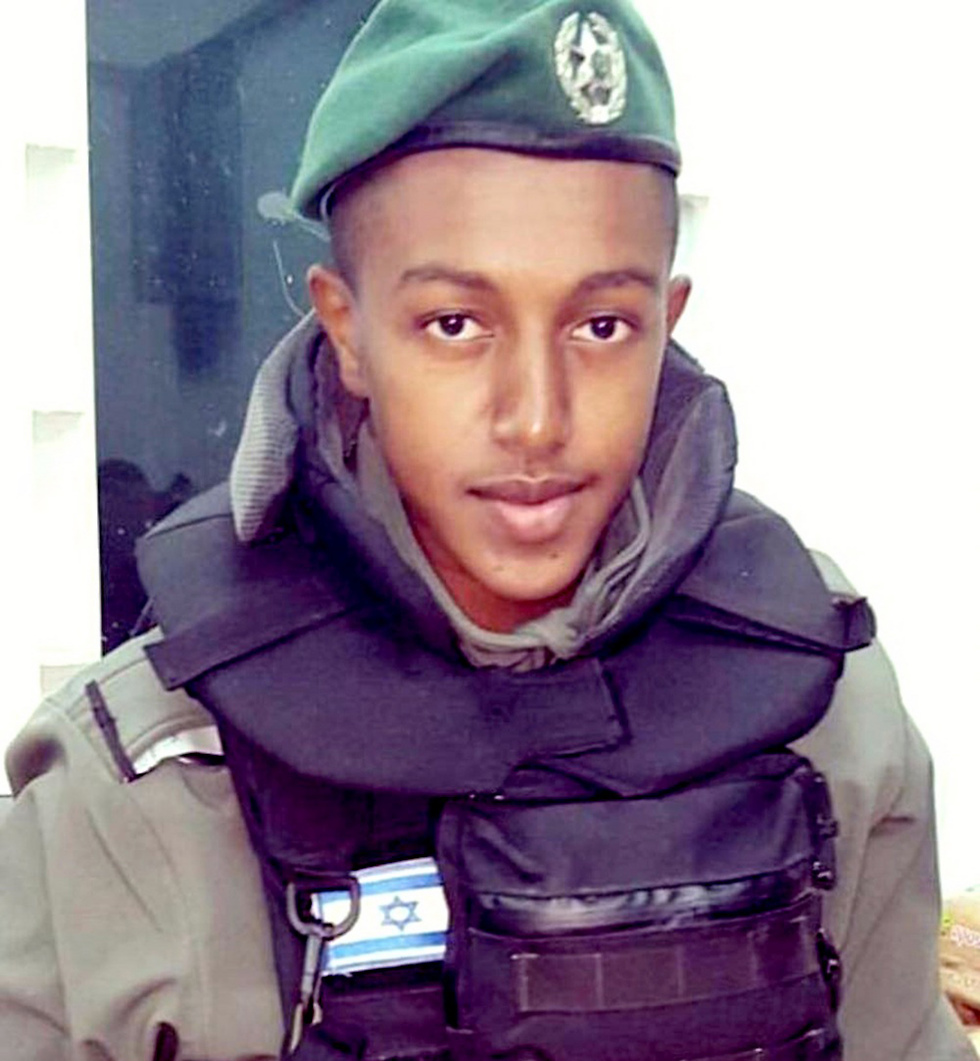 Head of the Be'er Yaakov Council Nissim Gozlan spoke about the deceased Gavriya. "He was injured in a terrorist attack in Jerusalem's Seam Zone just a year ago, but insisted on going back to the Border Police to defend the country only two months later," he recounted.

Gavriya's commander also spoke about the previous attack Gavriya was involved in. "He prevented a terrorist attack on the residents of Har Adar by pouncing on a terrorist, who then stabbed him. He insisted on returning to the service and his friends after recuperating," he said.

One of the security guards killed in the attack was identified as Youssef Ottman of Abu Ghosh. 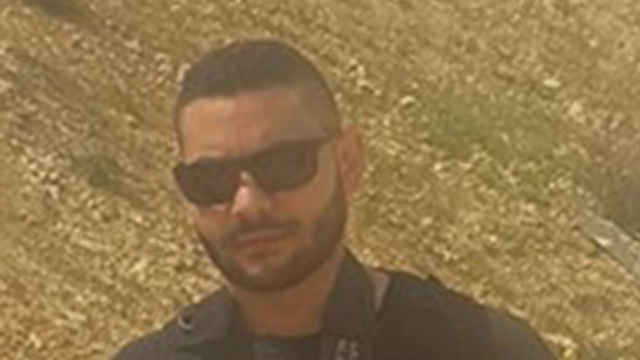 The second guard killed was later identified as Or Arish, 25, of Har Adar. 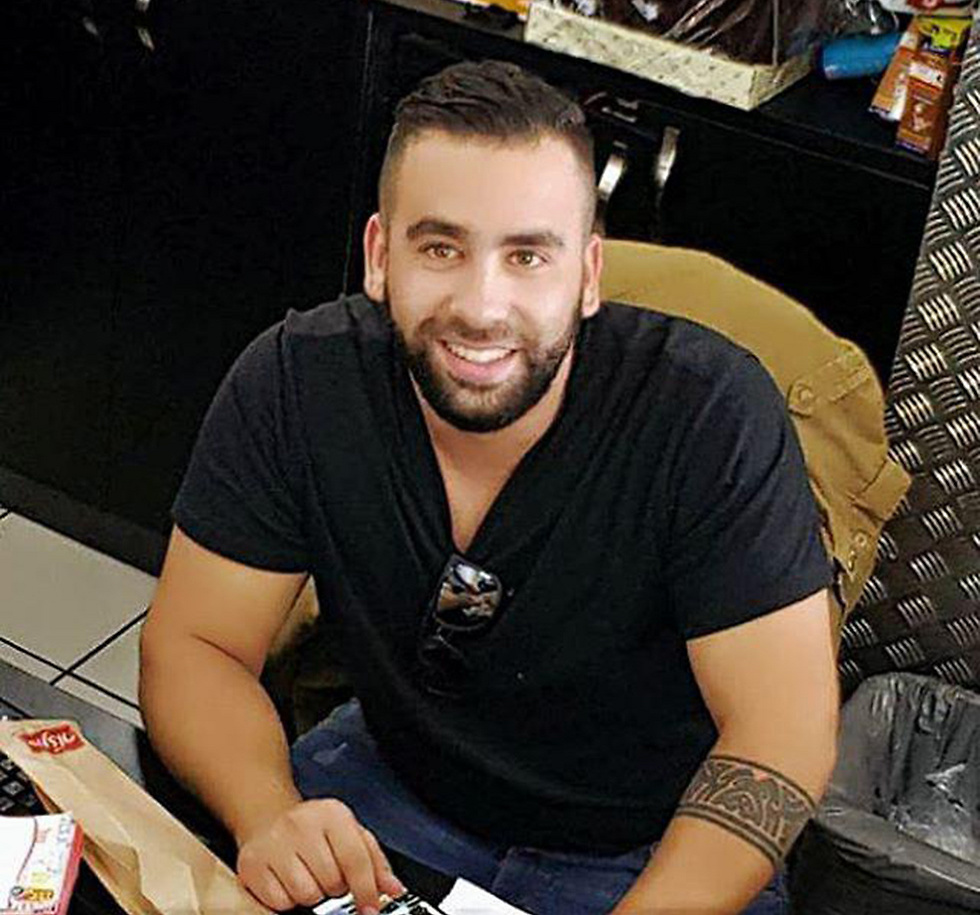 He was operated on in the Hadassah Medical Center in Jerusalem's Ein Kerem and his life was no longer in danger. His injuries have thus been downgraded to moderate.

"The surgery was successful. The 33-year-old patient was hit by a bullet in shoulder and hip. One of the bullets hit his spleen and diaphragm, and after dealing with these two organs, a team of orthopedic surgeons removed the bullets. He's been completely stabilized, is breathing on his own and is now recuperating in Hadassah's emergency care unit. He was certainly very lucky," said head of the Department of General Surgery at Hadassah Prof. Alon Pikarsky. 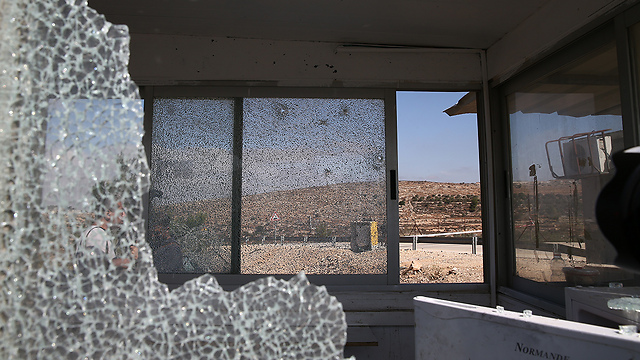 The attack took place while a security force was opening the settlement's peripheral traffic route.

Palestinian day laborers were nearing the checkpoint at the back entry to Har Adar in the early morning when one aroused the suspicions of Border Police and civil security forces while he was still on the Palestinian side. 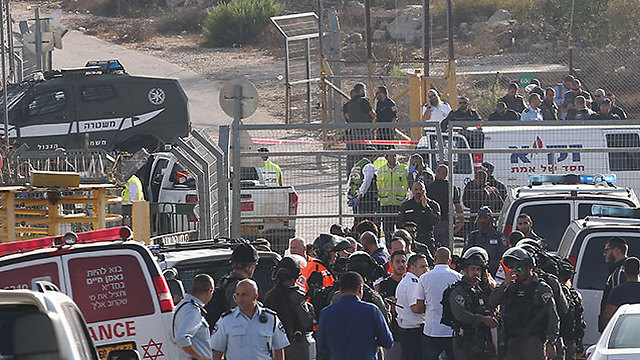 Forces then initiated the suspect arrest protocol and ordered him to stop.

When the terrorist realized he'd been made, he opened his shirt, drew a gun and fired at the guards and policemen at short range.

He was then shot dead by the Border Policemen.

"I unloaded from the vehicle, cocked my weapon and shot him with six rounds. He immediately dropped to the floor," Sergeant Major N. recounted. 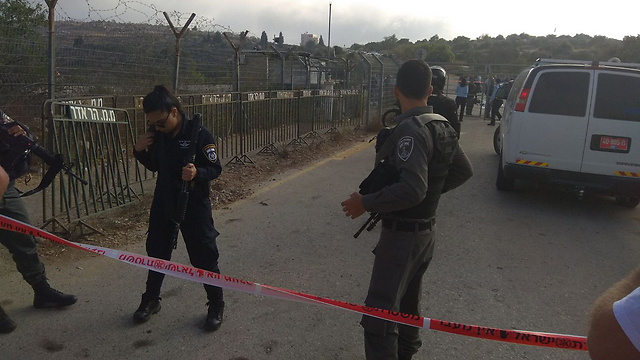 The terrorist, identified as Nimer Jamal, was a 37-year-old resident of Beit Surik with no record of security offenses, who held a work permit for the Seam Zone in the West Bank.

He was embroiled in a marital spat with his wife after reportedly physically assaulting her. She fled to Jordan, leaving him with the couple's four children. 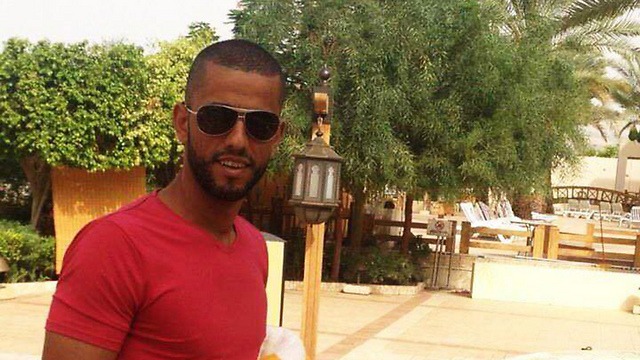 Following the attack, IDF and Border Police forces encircled the terrorist's village of Beit Surik, only permitting to exit it for humanitarian reasons. 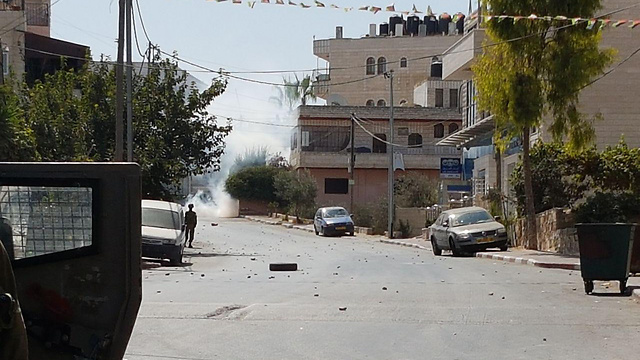 Subsequently, rioting broke out in the village of Biddu, near Beit Surik.

The riots that broke out in Biddu
X

The riots that broke out in Biddu

The weapon used in the attack was a regulation handgun reported stolen in 2003.

Security forces initially ruled out the presence of other terrorists at the scene, but have since made arrests in the terrorist's home village and the surrounding area, picking up Palestinians suspected of being involved in the attack in some capacity, including Jamal's brother. 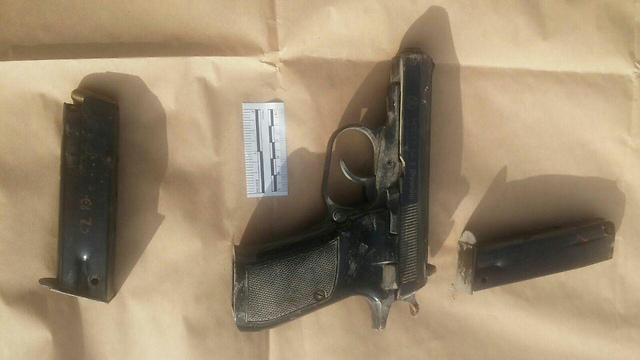 The gun used in the attack (Photo: Israel Police)


Har Adar residents were asked to bring all Palestinian day laborers who have already entered the settlement to the local community center.

Residents say the laborers are incensed with the terrorist, saying, "What has he done to us, how will we work now?"

The head of the Har Adar council Chen Filipovich said that "Hundreds of laborers enter the community each and every morning. This is an abnormal, difficult incident, and we'll be drawing the requisite conclusions from it. I want to send a calming message: 'We'll continue working to maintain the calm, good environment.'" 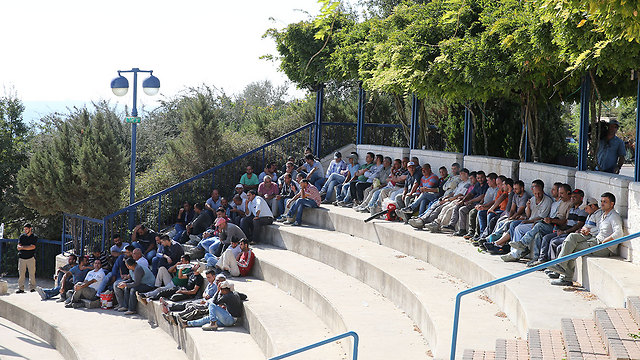 In addition, IDF forces from the Binyamin Territorial Brigade were roused to the area.

When asked about profiling the terrorist, who was a father of four with no record of security offenses, Alsheikh said, "You can't profile these terrorists."

"They're adult men or women, may be married, or they may be young. It can be anyone who decides they're fed up and tries to express their rage through an attack," he explained.

"We're still evaluating the situation. We're talking about the passage of laborers and Israeli society has needs of its own. Laborers are working with permits and the IDF itself considers it the chance of a normal life for Palestinians. We need to be sure no rash judgments are made," he cautioned. 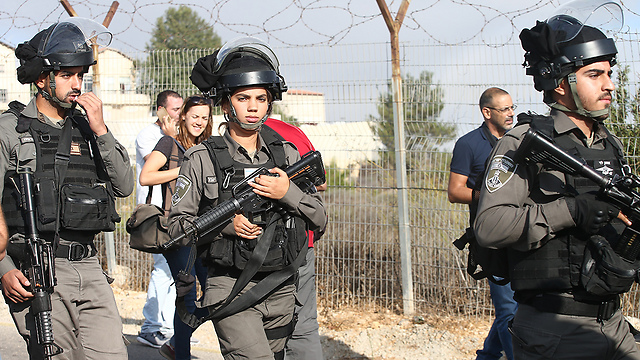 Hamas welcomed the terrorist attack, saying, "The Jerusalem attack is a new chapter in the Al-Quds intifada. It underlines the fact any attempts to Judaize (the city) have failed on the ground. Jerusalem is Arab-Muslim. Its residents and youth will spare no effort to redeem it with their spirit and blood."

Meanwhile, Munir al-Jaghoub, a Fatah spokesman, said "Israel carries sole responsibility for Palestinian response to the crimes of the occupation."

"Should Israel persist in its aggression against the Palestinian people, it can expect the violence to continue, as the daily injuries our people suffer are the root cause of it." 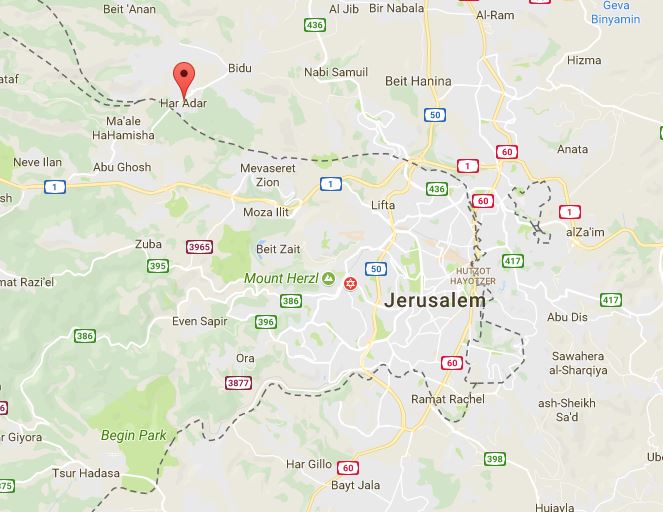 Prime Minister Benjamin Netanyahu spoke about the attack at the beginning of Sunday's cabinet meeting.

"This is a difficult morning with three Israelis murdered by a miscreant. On behalf of the government and the entire people of Israel, my condolences go out to the families of the deceased, and I also wish a speedy recovery to the settlement's military security coordinator who was also injured. The attack and its ramifications are still under investigation. What we can say now, however, is that the terrorist's home will be demolished, the IDF has already encircled his village and the work permits of his extended family will be revoked," he said.

"This murderous attack is a result of methodical incitement by the Palestinian Authority and other entities, and I expect Mahmoud Abbas to denounce the attacking rather than attempt to justify it. Security forces will continue working against the incitement and terrorism as they do every day, and we will conclude the inquiry into the specifics of this attack," he concluded.

"Before discussing any negotiations, the world should demand the Palestinian Authority stop incitement and fanning the flames of terrorism," said Minister of Defense Avigdor Lieberman in response to the terrorist attack.

"The Palestinian Authority continues inciting the murder of Jews and glorifying and extolling the virtues of murderers. This is a main reason why the atmosphere of incitement in the media and on social networks ends up leading to terrorist attacks against Israel's citizens," he added.

Public Security Minister Gilad Erdan spoke to reporters at the scene. "We're in an age of terrorism carried out by individuals, precipitated by incitement and ideological terrorism based on radical Islam and calls to 'kill the infidels.' When a terrorist has a valid work permit, you cannot be speaking about a national or territorial dispute. It only proves the conflict is religious, and not territorial," Erdan claimed.

"The policy of providing Palestinians with permits should be examined, but no hasty decisions should be made. Judea and Samaria should be under closure during the holidays because many Jews visit holy places, and so points of friction should be minimized," he added. 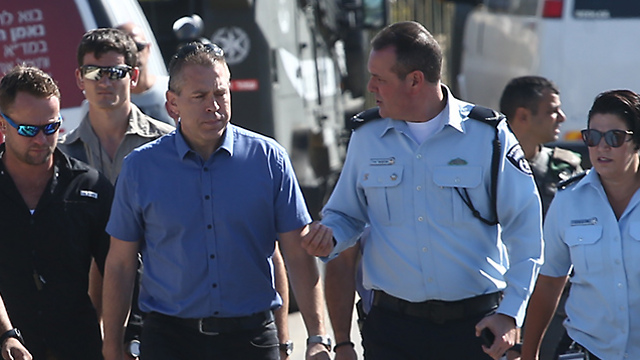 President Reuven Rivlin also condemned the attack, saying, “In such difficult moments, our hearts go out to the families of those murdered, and we pray for recovery of those injured. Such a brutal terror attack once again shows the daily frontline on which our security forces stand, charged today with the most important mission – the safeguarding and defense of the citizens of Israel. We will continue to confront terror, and will reach all its perpetrators and supporters.”

In the past few months, there has been a severe downturn in the number of attacks perpetrated by assailants from the West Bank or east Jerusalem.

The security establishment made preparations for a renewed wave of attacks during the High Holy Days, considered a sensitive time during which the wave of terrorism started two years ago.

IDF forces have therefore exerted increased pressures on local West Bank arms manufacturers, where dozens of turnery owners for self production of weapons were arrested and their shops closed. 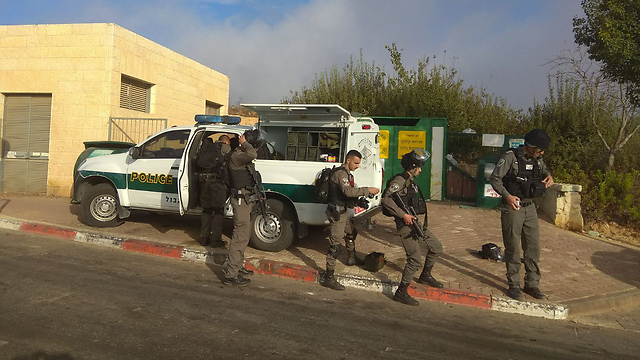 
The price of weapons, mostly Carlo rifles—a local version of the Carl Gustav submachine gun—has soared from NIS 1,500 for a single gun to many thousands.

As in most attacks, initial working assumption is the Har Adar terrorist worked alone, without belonging to the ranks of any organization that guided him. More likely, he took advantage of the close proximity of Palestinian villages west of Jerusalem to Israeli communities in the area, such as Har Adar. In some cases, only hundreds of meters separate Israeli and Palestinians homes on a nearby hill.

Throughout the "lone-wolf attacker" intifada, the security establishment made it a point to support the policy of providing Palestinians with work permits, out of the desire to differentiate between terrorists and their families and the general population that has no involvement in terrorism.

In a special Rosh Hashanah interview, Chief of Staff Gadi Eisenkot spoke about Palestinians entering Israel to work and study.

"Cooperation with the Palestinian Authority is partial, but still to the benefit of both sides. The PA is in charge of the life of over 2.5 million Palestinians in Judea and Samaria’s areas A and B. There’s dialogue," Eisenkot said.

"We’ve met a new phenomenon for the first time—not organized terrorism with proper weapons, but inspired terrorism," he added.

"We were able to restore security because we’re very experienced in dealing with terrorism. We operated in a determined and focused manner, while distinguishing the terrorist from the population and creating positive incentives for the majority of the Palestinian population. Every morning, over 900,000 young Palestinians go to study, while half a million work in Israel and Judea and Samaria. This is a positive dynamic and we have a distinct interest in preserving it: On the one hand to determinedly fight terrorism, while on the other to continue to allow better daily life for the population," he concluded his stance on the matter.