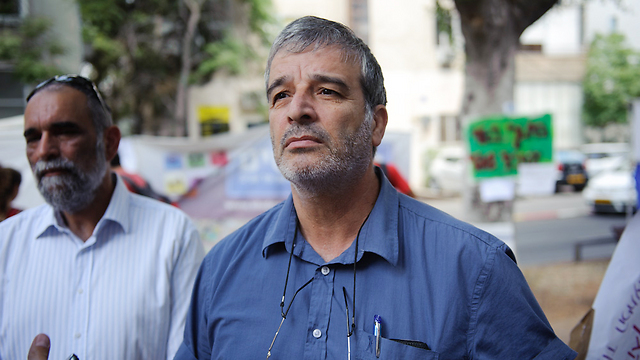 Despite repeated assurances from Interior Minister Deri and PM himself, work on Amichai, settlement for Amona evacuees, stalls once again when money to pay contractor runs out. Binyamin council appeal to ministry for continuing work without tende refused.

Work on the construction of the Amichai settlement, intended for Amona evacuees and restarted just a month ago after being halted, stalled again due to the Ministry of the Interior's refusal to exempt the Binyamin Regional Council from a tender process, preventing them from paying the contractor performing the work.

"First they stabbed us in the back, and now they're turning the knife. If (works stop again—ed), we'll all make a pilgrimage to Amichai on Sukkot," evacuees said.

The decision to halt construction was made following an instruction by the Chairman of the Binyamin Regional Council Avi Roeh, who ordered the contractor laying down the groundwork for Amichai to immediately desist until further notice.

Avi Roeh, head of the Binyamin Regional Council (Photo: Ben Kelmer)
The contractor won the bidding on a NIS 15 million tender to carry out various construction projects around the Binyamin council, but money ran out and the works stopped. The council then contacted the Ministry of the Interior to continue working with him on the Amichai project without releasing an additional tender, but the ministry refused.

"After the refusal, we had no choice but to instruct the contractor to stop working," a council source said, who said Interior Ministry officials toured the site earlier this week and were made aware of the issue.

Work on Amichai once again ground to a halt
It is not the first time work on the settlement long promised to Amona evacuees has been brought to a halt. Two months ago, Prime Minister Benjamin Netanyahu announced he'd instructed his bureau to personally handle the matter. Ministry of the Interior officials, including Interior Minister Aryeh Deri himself, also expressed their concern for the future settlement's residents, but work has nevertheless once again been halted.

"We simply refuse to believe this is happening again. If someone thinks they can give us the runaround, they don't know how wrong they are. We won't tolerate any more delays in the settlement's construction work. We've been wedged—six, seven or eight people— into one room in youth hostels, parents with children, for nine months," one Amona evacuee complained.

"Where's the prime minister? Where are the Likud ministers? Where's Bennett? How could they let this happen? We're sick and tired of all the talk and promises. In Sukkot we'll be going to Amichai and not leaving again," Amona evacuees declared.

Amona evacuees have resided in cramped quarters for nine months (Photo: Ohad Zwigenberg)
Speaking about the matter, the Ministry of the Interior said, "The tender for carrying out development work on the creation of the Amichai settlement are performed in full coordination and understanding between the ministry and the Binyamin Regional Council in charge of the work, with the aim of persistently pushing through a permanent solution for Amona evacuees." "Having said that, there's no getting around the fact every action must be carried out in accordance with the law, including the provisions relating to local authority contract work. Considering the above, the Ministry of the Interior examined the required contractual obligations and a mechanism was created to carry them out, including exemptions for certain applicable cases conforming with the law," the ministry concluded.