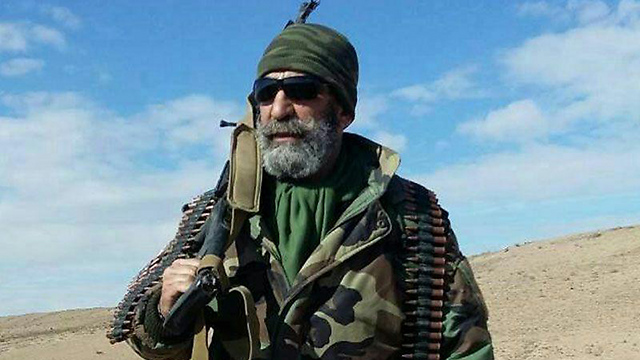 Syrian general Zahreddine, a war criminal known for his cruelty as well as for taking back central ISIS strongholds, is killed by a land mine explosion on Wednesday.

Issam Jad'aan Zahreddine, a top Syrian army general under President Bashar al-Assad, was reportedly killed on Wednesday by a land mine explosion. 56-year-old Zahreddine, believed to be the highest ranking Druze officer in the Syrian army, died in the Hawija Saqr region, where Assad's regime has been concentrating its efforts in its fight against ISIS.

Zahreddine was a controversial figure, reviled, feared and exalted by opposing sides in the Syrian civil war. Assad's supporters saw him as one of the key figures in the battle against the Islamic State. Following news of his death, Lebanon-based terror organization and Assad supporter Hezbollah issued a statement praising his military accomplishments.

"He was the man who erased the legend of ISIS and turned it from a spreading organization into scattered groups," read Hezbollah's eulogy of Zahreddine, whose ruthlessness in fighting for Assad earned him the nickname "the animal commander."
Zahreddine interviewed on the battlefield
X

Zahreddine interviewed on the battlefield

Those opposed to Assad's regime expressed their jubilation in Zahreddine's demise. Some even wondered if one of Assad's supposed allies—namely, Russia or Hezbollah—were the ones behind his death.

Zahreddine
Zahreddine first gained recognition in '11, as a commander who fought the then-fledgling Syrian uprising against Assad's dictatorship. The anti-Assad opposition has accused Zahreddine of committing horrendous war crimes, among them the massacre carried out in the suburbs of Damascus in '12.

(Photo: AFP)
Qatar-based Arab media network Al Jazeera has reported that "Zahreddine is known for his cruelty. He has previously been recorded in a video posted online as boasting while the bodies of the slaughtered lay in front on him."

After a year of concerted effort near the East Syria city of Dei red-Zor, Zahreddine managed to break through ISIS's defenses in September, which raised his popularity even higher among Assad supporters.

Zahreddine's coffin is brought to Damascus
Zahreddine was born in Syria's As-Suwayda region, on Jabal al-Druze (Druze Mountain). The Syrian regime was apparently looking to promote him to a rank equivalent to an IDF brigadier general, in an effort to present an image of prosperity and opportunity for minorities under Assad.