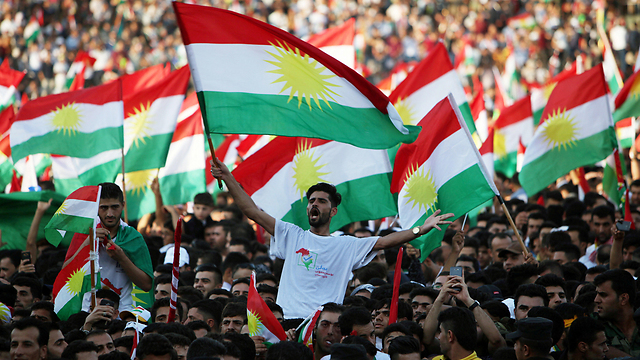 After the Iraqi government transforms balance of power, seizing territories from the Kurds in the north, Kurdistan Regional Government gives in to pressure, offering to put the independence referendum on hold and engage in talks with Baghdad.

CAIRO/BAGHDAD - The Kurdistan Regional Government (KRG) offered on Wednesday to put an independence referendum on hold as part of efforts to end the military confrontation with Iraqi forces, and resolve the crisis with the central government in Baghdad through dialogue.

The Iraqi government has transformed the balance of power in the north of the country since launching a campaign last week to seize back territory from the Kurds, who govern an autonomous region of three northern provinces and had also seized a swathe of other territory in northern Iraq.

"The fighting between the two sides will not produce a victory for any, it will take the country to total destruction," said the KRG in a statement.

"We make the following proposal to the government and Iraqi and international public opinion: 1- immediate ceasefire (..) 2- freezing the results of the referendum (..) 3- starting an open dialogue with the federal government based on the Iraqi Constitution," it said.

The Kurds held a referendum on independence on September 25 that Baghdad called illegal. Baghdad responded by seizing back the city of Kirkuk, the oil-producing areas around it and other territory that the Kurds had captured from Islamic State.

Prime Minister Haidar Abadi has ordered his army to recapture all disputed territory and has also demanded central control of Iraq's border crossings with Turkey, all of which are inside the Kurdish autonomous region itself.

Just a month ago, Iraq's Kurds were celebrating their symbolic vote for independence as a historic step toward their decades-old dream of statehood, with enough energy reserves to guarantee generations of prosperity.

But instead of moving forward with negotiations toward a smooth divorce from Baghdad, Kurdish politicians have been humiliated with the loss of their most important oil-producing city, Kirkuk, which was taken over by Iraqi troops last week. That has squeezed an already hurting economy and dashed hopes of an independent state.

Worse still, their traditional allies in the US and Turkey have hardly acted to moderate against Iraq's central government, and Kurdish leaders feel they are under siege in a world stacked decidedly against separatism.

"They want to push us into an internal war," said Ali Awni, an adviser to Kurdish President Masoud Barzani.

US Secretary of State Rex Tillerson visited Baghdad on Monday amid hopes the former Exxon executive would mediate between the Kurds and Iraq, but there were no immediate changes in the dispute.

Abadi demands that Kurdish officials hand over a disputed pipeline between the Kurdish region and Turkey, a move that would effectively doom Kurdish oil exports and devastate the regional budget. The border with Turkey, Baghdad says, constitutionally belongs to federal authorities.