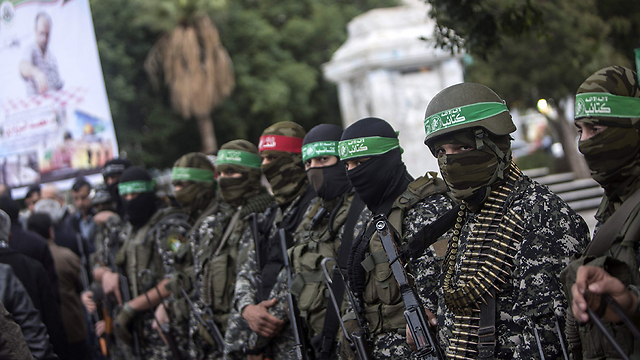 Hamas: 'Renew intifada' to stop US recognition of Jerusalem as Israeli capital

Gaza terror group says expected American move 'would give a cover to Israel to pursue the judaization of Jerusalem and expulsion of the Palestinians from the city'; Abbas aide warns move would amount to 'complete destruction of peace process,' while Arab League warns it could fuel violence.

The Gaza terror organization Hamas called on Saturday to "renew the Jerusalem intifada" to prevent the United States from recognizing Jerusalem as the capital of Israel.

"This decision would represent a US assault on the city and give legitimacy to (Israel) over the city," a Hamas statement said Saturday.

It would also violate international law, which views Jerusalem as occupied territory, and "give a cover to Israel to pursue the judaization of Jerusalem and expulsion of the Palestinians from the city," Hamas said.

Hamas fighters in Gaza (Photo: AFP)
"We call on the Palestinian people to stand as an impenetrable floodgate and a tall wall against this decision and renew the Jerusalem intifada," the statement added.

Recent reports on both Reuters and the Associated Press quoted US administration officials who said President Donald Trump is likely to make the announcement this coming Wednesday.

Palestinian President Mahmoud Abbas's adviser Mahmoud Habash said Saturday if President Trump were to do so it would amount to a "complete destruction of the peace process."

Speaking in Abbas' presence, Habash said "the world will pay the price" for any change in Jerusalem's status.

Palestinian President Abbas (Photo: Reuters)
Earlier, secretary-general of the PLO Executive Committee and chief negotiator with Israel Saeb Erekat warned that "Any American recognition of Jerusalem as the capital of Israel will bring about the end of the Jerusalem issue. This issue is weighty and dealing with it is playing with fire."

Nabil Abu Rdainah, spokesman for Palestinian President Mahmoud Abbas, said US recognition of Jerusalem as Israel's capital would "destroy the peace process" and "destabilize the region."

The Arab League also condemned the move, warning it would fuel extremism and violence.

"Today we say very clearly that taking such action is not justified ... It will not serve peace or stability, but will fuel extremism and resort to violence," Arab League Secretary-General Ahmed Aboul Gheit said in a statement published on the Arab League's website on Saturday.

"It only benefits one side; the Israeli government that is hostile to peace," he added.

Trump could make the controversial declaration in a speech on Wednesday though he is also expected to again delay his campaign promise to move the US embassy to Jerusalem from Tel Aviv. A senior official and two other government sources quoted by Reuters said final decisions had not yet been made.

Meanwhile, a report on the Washington Post on Friday revealed details behind the scenes of the decision.

The US president is due to sign the traditional six-month waiver overriding a 1995 law requiring that the US embassy be moved from Tel Aviv to Jerusalem.

Trump was said to be apprehensive about not signing the waiver amid pressures exerted on the president by Republican Party officials and Evangelical Christians.

US President Donald Trump (Photo: AP)
According to the Post, several of Trump's top national security advisors met at the White House on Monday to discuss the issue. Most of the officials present, according to the Post, expected the White House to once again postpone the embassy's move, but to say Trump remains committed to his campaign promise, stressing it was a question of when, not whether, the embassy is moved. When Trump joined the meeting, however, he "became agitated and exasperated at what he saw as overly cautious bureaucratic hand-wringing," the Post quoted two officials who were present as saying.

Eventually, the decision was made to postpone the embassy's move, but at the same time make a formal declaration that the United States recognizes Jerusalem as the capital of Israel.

While such a declaration would not have any immediate practical consequences, it would still be a departure from decades-long American policy about Jerusalem, according to which the city's status can only be determined in negotiations between Israel and the Palestinians.