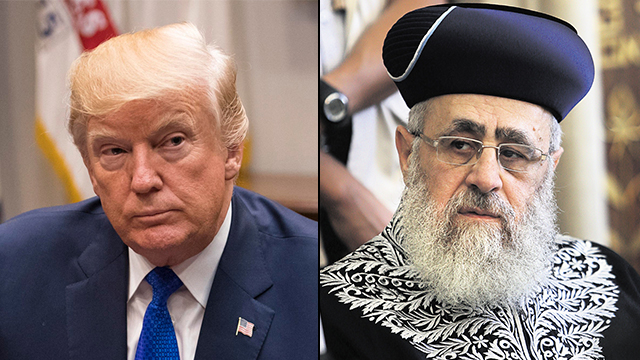 Rabbis to Trump: 'You are fulfilling prophecies'

250 rabbis sent thank you letter praising Trump's decision to recognize Jerusalem, telling him 'You will be eternally remembered in the history of the Jews'; Satmar: decision can harm Jews worldwide

Some 250 Israeli rabbis, including Chief Rabbi Yitzhak Yosef, sent a thank you letter to US President Donald Trump praising him for his decision to recognize Jerusalem as Israel's capital.

The letter, intiated by the Safed's Chief Rabbi Shmuel Eliyahu and delivered by Yossi Dagan, the head of the Samaria Regional Council, told the American president, "You have a rare privilege to be the first president to recognize Jerusalem as the eternal capital of the State of Israel."

"We are privileged to be living in a generation that is repeatedly witnessing the words of the prophets coming true," said the rabbis, "Jews have made aliyah and are continuing to come to the land of Israel from all corners of the world. Israel triumphs over its enemies time after time, the mountains of Israel offer generous bounty and the economy is booming."

'You will be remembered in the history of the Jews people'

"We are privileged to be seeing the rebuilding of Jerusalem," wrote the rabbis. "'Children play in its streets' (Zechariah 8:4) and we are confident in the fulfillment of all the prophecies. The United States is privileged to be one of the first nations to support the establishment of the State of Israel. US presidents have had the privilege of being at Israel's side and being a partner in the fulfillment of the vision of the prophets regarding the return to Zion and the establishment of the State of Israel."

Trump at Western Wall (Photo: Reuters)
They continued, "We are confident that you will be remembered in the history of the Jewish people as one who stood at the forefront fearlessly. May it be His will that God's promise to Joshua (1:9) should be fulfilled in you: 'Have I not commanded you? Be strong and courageous. Do not be afraid; do not be discouraged, for the Lord your God will be with you wherever you go'—amen, amen." The letter was signed by rabbis of a wide range of communities, including rabbinical judges and yeshiva heads. Chief Rabbi Yitzhak Yosef, national religious leader Rabbi Haim Drukman, the Rabbi of Safed Shmuel Eliyahu and Rabbi Elyakim Levanon of the Samaria region are some of the prominent signatories. "The American people recognize that Jerusalem is the capital of Israel," said Yossi Dagan, head of the Samaria Regional Council. "We commend the president in his decision, but we ought to remember that Israel is an independent state and only it can make decisions for itself."

"With this recognition, we see the fulfillment of another step in the completion of the prophecy of Isaiah that the nations of the world will recognize the centrality of Jerusalem," said Rabbi Eliyahu. "'For Zion’s sake I will not keep silent, for Jerusalem’s sake I will not remain quiet, till her vindication shines out like the dawn, her salvation like a blazing torch. The nations will see your vindication' (Isaiah 62:1). We hope that other enlightened and believing nations will follow in the footsteps of the United States."

Rabbis of a sub-sect of the anti-Zionist Hassidic sect of Satmar have called on the American president not to move the embassy to Jerusalem because it can endanger Jews in Israel and all over the world who "will pay a price for the misdeeds of the Zionists."

"Jerusalem is a holy city from a religious and spiritual, but not political, perspective," claimed the ultra-Orthodox rabbis. They pointed out that after the UN recognition of Israel the rabbis of the Orthodox Council of Jerusalem requested that the holy city remain under international sovereignty. In ads they published in the American media, they said that Israel cannot declare Jerusalem as the capital of the Jews "since the capital of American Jews is Washington; the capital of Russian Jews is Moscow; the capital of French Jews is Paris; the capital of British Jews is London and the capital of Iranian Jews is Tehran, Jerusalem however is a holy, and not a political, city." The official Satmar court was ambivalent about how to respond to Trump. On the one hand, they oppose Israeli sovereignty in Jerusalem. On the other hand, the reasoning behind their opposition to Zionism is the exile mentality that there is a religious obligation to refrain from provoking and antagonizing the nations of the world and maintain a controversial Jewish state. Accordingly, criticism of the White House, itself a form of provocation of the government under which Jews reside, is an unviable position. Therefore, the Satmar Rebbe, the leader of the community, has remained silent on the matter and it is being handled by smaller sub-sect.