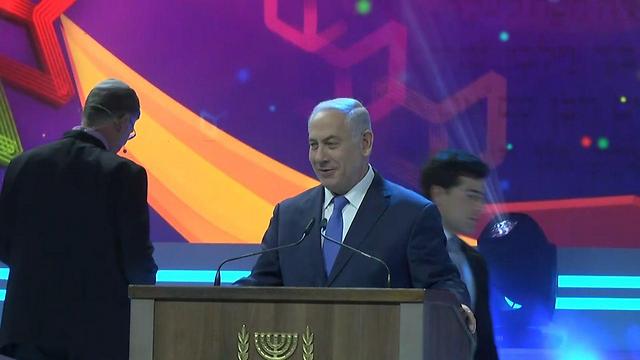 Prime Minister Benjamin Netanyahu was heckled while delivering a speech Tuesday during the International Bible Quiz by members of the group dubbed “No selling to murderers.”

The activists, who were eventually removed from the lecture theater, interrupted the prime minister’s speech as they waved placards and signs while chanting, “Light unto the nations, don’t sell to murderers.”

The group activists were demanding that Israel put a halt to arms sales to murderous regimes, placing particular emphasis on demands to nullify military aid they say is being given to Myanmar.

“Jewish morals and our shared values obligate us to be a light unto the nations and not lend a hand to slaughter,” the group yelled during the speech at the International Convention Center in Jerusalem.

The group is also taking steps to advance legislation that would forbid the government from providing assistance to regimes engaged in ethnic cleansing and genocide.

Eventually, the crowd shouted the activists down with cries of support for the prime minister, chanting “Bibi, Bibi!”

The activists are also demanding that Israel halt arms exports to Honduras amid violent protests there following disputed elections.

A group representative, lawyer Eitay Mack, sent a letter to Israel's Defense Ministry asking that it freeze or annul the arms sales over accusations of human rights abuses committed by Honduran security forces. The letter, sent last week, comes after weeks of protests following Honduras' November 26 election, in which at least 14 people have been killed.

The goal of inhibiting the Israeli government's ability to sell arms unabated to murderous regimes has united lawmakers across the board.

“The people of Israel returned to the land of Israel in order to be a moral lighthouse, to show justice and integrity to the world,” Glick said. “If we are forced to produce weapons then they have to be in order to protect lives rather than take lives in an immoral manner. This is our moral obligation.”