The church hit in the attack Friday
Photo: Reuters 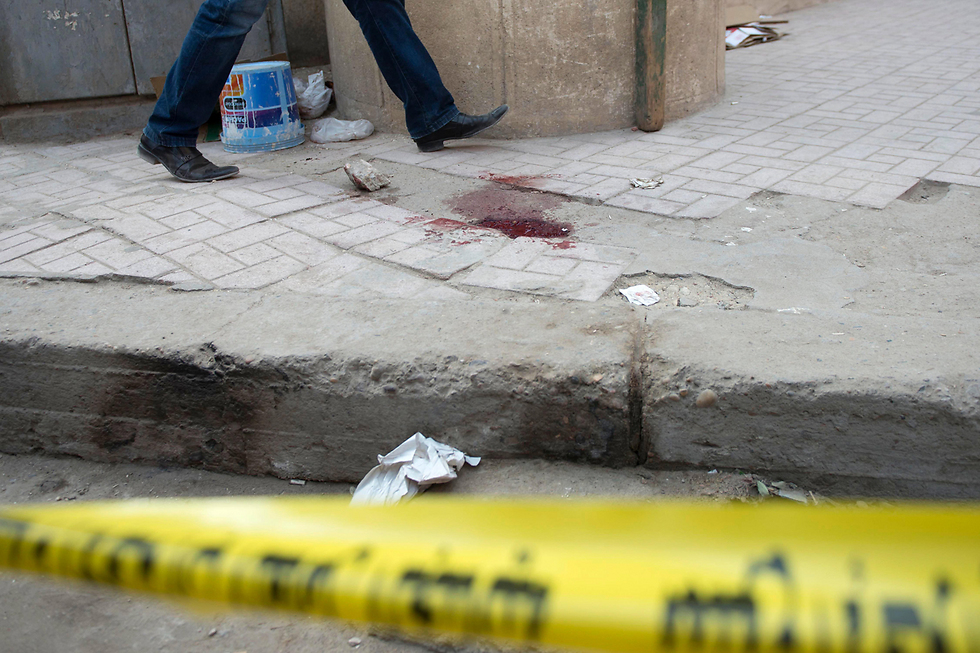 At least 9 killed in attack outside Cairo church

A gunman on a motorcycle opened fire Friday outside a church in a Cairo suburb and at a nearby store, sparking a shootout that killed at least nine people, including eight Coptic Christians, Egyptian authorities said. It was the latest attack targeting the country's embattled Christian minority.

The gunman was also killed, along with at least one police officer, officials said. The attack began when the gunman tried to break through the security cordon outside the Coptic Church of Mar Mina. It was not clear how many assailants were involved. Egypt's Interior Ministry referred to only one, but the Coptic Orthodox church mentioned "gunmen."

The scene of the attack (Photo: EPA)
Five people were wounded, including another police officer, Health Ministry spokesman Khaled Megahed said. The attack came amid tightened security around churches and Christian facilities ahead of the Coptic Orthodox Christian celebrations of Christmas on Jan. 7. Police have been stationed outside churches and in nearby streets across Cairo. President Abdel-Fattah al-Sisi has personally chaired meetings with his top security chiefs in recent days to discuss security during New Year's Eve and the Orthodox Christmas. A video circulating on social media after Friday's attack apparently showed the gunman lying on the ground with his face covered in blood. Authorities closed off the area around the church.

The Interior Ministry identified the assailant as Ibrahim Ismail Mostafa, who, the agency said, was involved in several previous militant attacks. The Interior Ministry said he was wounded and arrested but made no mention of his death, which was reported by the Health Ministry.

The assailant had earlier opened fire at the nearby store owned by a Christian, the Interior Ministry said.

No group took immediate responsibility for the attack, which bore the hallmarks of Islamic militants, who have for years battled security forces in Egypt's Sinai Peninsula in an insurgency now led by a local affiliate of the extremist Islamic State group. It is centered in the turbulent northern part of Sinai but has also carried out attacks in the mainland.

The latest attack, in the southern Cairo suburb of Helwan, showcases the difficulties faced by security forces in containing an insurgency that is growing in sophistication and brutality. The assault came a little more than a month after militants killed 311 worshippers inside a mosque in Sinai, the deadliest attack by militants on civilians in Egypt's modern history.

Last week, they fired a guided rocket that destroyed an army helicopter at the airport of the city of el-Arish in northern Sinai during an unannounced visit there by the defense and interior ministers. At least one senior officer was killed and two wounded in that attack, which pointed to an unusually high level of intelligence available to the militants.

(Photo: Reuters)
Samir Gerges, a witness to Friday's church attack, said people inside the church closed the gates when the shooting began but that some bullets penetrated the building. Gerges said he was walking along a nearby street when the gunfire broke out. He saw people running and some taking cover in a nearby restaurant. Another witness, 40-year-old Raouth Atta, was praying inside the church when the violence broke out. "People were terrified and wanted to check on their families in other buildings of the church," she told The Associated Press by phone. "We stayed inside for 30 minutes before we were able to get out." Once she was able to leave, Atta said, she saw blood everywhere. "We kept praying," said Father Boules, who was teaching a class in the church complex. On hearing gunfire, he went to check on his students, who were panicking and terrified.

Egypt's government has been struggling to contain an insurgency by Islamic militants led by an Islamic State affiliate that is centered in the turbulent northern Sinai peninsula but has also carried out attacks in the mainland.

Egypt's Christian minority has been targeted by Islamic militants in a series of attacks since December 2016 that left more than 100 dead and scores wounded. The country has been under a state of emergency since April after suicide bombings struck two Coptic Christian churches on Palm Sunday in an attack that was claimed by the local affiliate of the Islamic State group.

(Photo: Reuters)
Christians, who make up about 10 percent of Egypt's population, have long complained of discrimination in the Muslim-majority nation, and say authorities have often failed to protect them from sectarian attacks. Just last week, hundreds of Muslim demonstrators stormed an unlicensed church south of Cairo wounding three people. The demonstrators shouted anti-Christian slogans and called for the church's demolition, the diocese in the area said at the time. The demonstrators destroyed the church's contents and assaulted Christians inside before security personnel arrived and dispersed them.