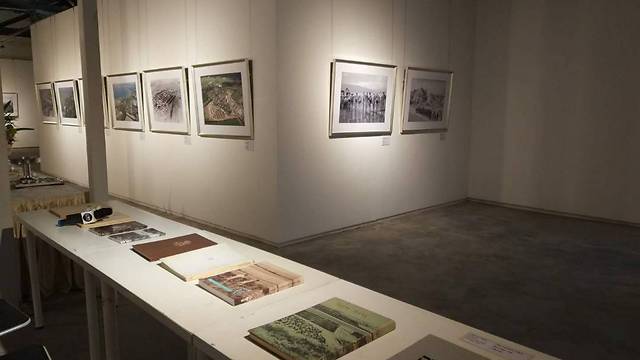 On two several and prominent location in China's sprawling port city northwest of Hong Kong, the Israeli kibbutz is put on display, educating visitors about a unique aspect of Israeli life.

Two major exhibitions of the history of the Israeli kibbutz are being exhibited in China.

Israel's consul-general in Guangzhou Nadav Cohen and his wife Einan Cohen, who is the cultural attaché at the consulate, both of whom are former kibbutz members, initiated the two exhibitions as part of the Ministry of Foreign Affairs' "Jubilee" project.

(Photo: Consulate General of Israel in Guangzhou)
One exhibition is displayed for a month and a half at the Guangzhou's Red Torii Museum and the second at the Guangzhou Academy of Fine Arts in Shantou, where a joint campus was established with the Technion, where 216 students study engineering studies according to the Technion's format.
The audiovisual exhibit    (צילום: הקונסוליה הישראלית בגואנגדז'ו)
X

The audiovisual exhibit   (Video: Consulate General of Israel in Guangzhou)

The exhibition is an audiovisual journey that presents the collective history of Kibbutzim in Israel in the years 2010-2017, with an emphasis on "intimate humanity" and combining photography, video art, documentary films and a soundtrack by the Gevatron Choir.

"The State of Israel, with all its advanced achievements, is highly regarded here, and the kibbutz is perceived as a success story with its unique contribution to its establishment," explained Nadav Cohen, a kibbutznik from the Jordan Valley.

"For many of the older generations, the kibbutz is reminiscent of the communal settlements in the periphery of China during the Communist revolution."